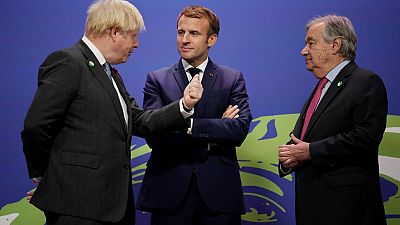 Over 130 heads of state will take to the podium on Monday and Tuesday at crucial and urgent international climate negotiations in Glasgow for the UN COP26 summit.

From US President Joe Biden to Seychelles President Wavel John Charles Ramkalawan, all are expected to say how their nation will do its utmost to fight the threat of global warming.

"Humanity has long since run down the clock on climate change,'' British Prime Minister Boris Johnson said during Monday's opening session. "It's one minute to midnight and we need to act now.''

The idea is that they will do the big political give-and-take, setting out broad outlines of agreement, and then have other government officials hammer out the nagging but crucial details.

"That's what worked to make the historic 2015 Paris climate deal a success," former UN climate secretary Christiana Figueres said. "For heads of state, it is actually a much better use of their strategic thinking."

"In Paris, the two signature goals – trying to limit warming to 1.5 degrees Celsius since pre-industrial times and net-zero carbon emissions by 2050 – were created by this leaders-first process," Figueres added. "In the unsuccessful 2009 Copenhagen meeting, the leaders swooped in at the end."

However, there have been some noticeable no-shows. Xi Jinping, president of the top carbon polluting nation China, and Russian President Vladimir Putin are not in Glasgow.

According to Figueres, the absence of the Chinese leader is not a deal-breaker as Xi Jinping does not leave the country during the pandemic and his climate envoy is a veteran negotiator. But the absence of several small nations from the Pacific islands that could not make it because of COVID-19 restrictions and logistics is a big problem because their voices relay urgency.

Xi Jinping, president of the top carbon polluting nation China, and Russian President Vladimir Putin are not in Glasgow.

Turkish President Recep Tayyip Erdogan also decided not to travel to Glasgow, without citing a reason for the change of plans.

This follows news from scientists who say the chances of meeting the goal to keep global temperatures from rising by more than 1.5 degrees Celsius this century are slipping away.

The world has already warmed by more than 1.1 degrees and current projections based on planned emissions cuts over the next decade are for it to hit 2.7 degrees by the year 2100.

If this were to happen, much of the planet's ice would melt, raising global sea levels and likely increasing the extreme weather conditions, say experts.

Before the UN climate summit in Glasgow, the heads of the world's largest economies met in Rome over the weekend for the G20.

The leaders of the Group of Twenty offered vague climate pledges instead of commitments of firm action, saying they would seek carbon neutrality "by or around mid-century."

The G20 countries, which represent more than three-quarters of the world's climate-damaging emissions, also agreed to end public financing for coal-fired power generation abroad but set no target for phasing out coal domestically – a clear nod to China and India.

The world's third-biggest emitter, India, has yet to follow China, the US, and the European Union in setting a target for reaching net-zero emissions.

Negotiators hope the country will announce this goal in Glasgow.

The Biden administration has tried hard to temper expectations that two weeks of climate talks will produce major breakthroughs on cutting climate-damaging emissions.

What can be expected from the COP26 summit?

The "Doomsday Clock" is close to striking the witching hour as world leaders gather in Glasgow on November 1, but many believe there is very little to celebrate after the mild pledges on carbon neutrality and coal financing made at the G20.

But how did the world get into this position?

"It all goes back to 1992 and the establishment of the UN Framework Convention on Climate Change, which was the body that organised these meetings at the time," says Euronews science correspondent Jeremy Wilks.

"The discussions that we're having in Glasgow now are basically picking up from the Paris Agreement in 2015 and saying: 'How much have you reduced your greenhouse gas emissions by?' and that's something called the Nationally Determined Contributions (NDCs). The countries have to come forward and declare what it is they've done," Wilks went on.

"The other thing that they are talking about, which was initially discussed back in Copenhagen in 2009, is climate finance and how much are the rich countries giving to the poor countries in order to help them cut their greenhouse gas emissions and adapt to this warmer climate," he added.

Leaders and delegates are also expected to discuss the rules on the carbon market and how to establish a proper international carbon market.

The main term coming out over and over from these conferences is "net-zero", but what does it mean?

"There's no universal definition for what net-zero actually means. It's one of those nebulous terms. The idea, of course, is that the amount of emissions that you have to put into the atmosphere because you can't clean up a certain industry are then pulled back, either using machines capturing carbon from the atmosphere or by planting trees, etc.," Wilks told Euronews.

"Lots of countries are saying they want to do net-zero, but there's no real definition of what that means, and something that could come out of Glasgow is a proper conversation to define that concept, to make sure there's not too much in the way of creative accounting, as you tend to see in tax operations, for example. The same kind of thing could happen with net-zero, for sure. So we need to try and avoid that."

"The main thing would be: 'Can we rebuild trust between the richer countries and the poorer countries?' And that would be making sure that the $100 billion a year target of financing from the rich to the poor, to help them with mitigation and adaptation, is actually going to happen. That was supposed to happen by 2020, and it's not happening yet. So if that comes through, that will be considered a success," Wilks noted.

"Work to reduce methane emissions, which is actually relatively easy. We've got the technology to do it, that needs to happen too. We also need to create a properly functioning international carbon market. I don't think that'll happen in the next two weeks, but advancing on that will make a difference."

"Killing off coal properly on a national level, as well as internationally, will also be seen as a success. And then I think the main thing would be an agreement to meet earlier rather than every five years under the Paris agreement in a way to accelerate the process and actually achieve the goals that were set out in 2015," he concluded.

Watch the full interview with Euronews science correspondent Jeremy Wilks in the video player above.

We need to include people in net-zero transition plans | View