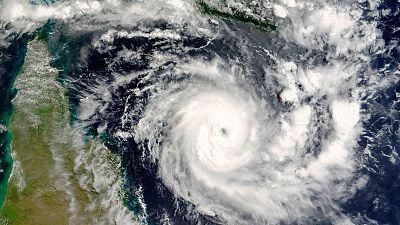 Inva Hasanaliaj is studying for an MA in Journalism at Falmouth University. In this piece she shares how lessons learnt in the Global South could encourage Europeans to take action on climate change.

Meteorologist Nadia Bloemendaal can see into the future and it’s looking rough.

For now, she models data on extreme weather in the Global South but it’s already revealing trends that could shape life in Europe in the next 50 years.

Many young people worried about the climate crisis take up activism, but Bloemendaal prefers being behind a computer screen. This is where she says she can really make a difference.

Bloemendaal developed her cyclone early-warning system for communities in the Global South, and it’s now ringing alarm bells much closer to home. Recent bouts of extreme weather in Europe could be a sign of things to come.

In July floods hit Germany and Belgium, killing at least 180 people but storm warnings allowed the Netherlands to avoid casualties. These storms were a clear signal that Europe needs to start adapting to extreme weather, setting up “..early warning systems and adequate communication … that can save lives,” says Bloemendaal.

Look at climate change as the fuel for tropical cyclones she says, and if seawater reaches a temperature of 30 degrees Celsius that’s a lot of ‘cyclone fuel’.

The scenario is set to get worse as temperatures increase and sea levels rise in the south. The effect of this could be temperatures in northern coastal regions reaching up to 27 degrees Celsius. Based on the science she is seeing, Bloemendaal says parts of the world that don’t see tropical cyclones now, may see them in the next 30 to 50 years.

She adds that we’re already experiencing the effects of climate change in Europe, arguing that based on the scientific data she’s seeing, the world has only a couple of years to stall its progress.

“There is research out there suggesting that we are going to see more hurricane-force storms which were once tropical cyclones and have moved into Europe,” Bloemendaal warns.

The 2021 Intergovernmental Panel on Climate Change (IPCC) report underlines this. Even at a targeted 1.5 degrees Celsius level of global warming, heavy rains and flooding are likely to increase in Europe, Africa, Asia, and North America.

Bloemendaal is keen to communicate her research in terms people without a scientific background can understand and has been fascinated by weather since she was a child.

“The way I got into meteorology is watching the movie Twister,” she says.

“That’s what started my interest in severe weather. That was the moment I was like, OK, I’m going to be a meteorologist. I want to be a storm chaser. I want to hunt those tornadoes.

"I want to find out more about them and I want to come up with a mechanism to basically save people from severe weather.”

Based at Amsterdam University’s Faculty of Science, Water and Climate Risk, Bloemendaal’s work is attracting a lot of attention from the wider scientific and business community.

I want to hunt those tornadoes - I want to find out more about them and I want to come up with a mechanism to basically save people from severe weather.

In the last two years, she has received prizes for her work on climate risk from Allianz and Lloyd’s. In 2020 she was part of the team awarded the Dutch Data Prize for their STORM dataset, which models tropical cyclone risk.

STORM uses historical records of all cyclone locations, adding meteorological data and current risk factors like climate change. It then models predictions of when the next tropical storm is going to hit and how intense it will be.

Rich nations like the US experience tropical cyclones and have sophisticated warning systems, but STORM is designed to be used everywhere. It can help protect people at the most basic level, by asking questions like “How big are the chances that your house is gone get hit by a tropical cyclone?” says Bloemendaal.

On the frontline of the climate crisis

For those living on the frontlines of the climate crisis, it’s only too clear cyclone warnings could save lives and livelihoods.

Kartik Chandra Mandal, 42, a farmer from Hajatkhali in Bangladesh, has twice seen his life devastated by tropical storms. In 2009 he was forced to abandon rice paddy fields which turned saline when flooded by seawater.

Mandal then had a job on a shrimp farm which was also ruined by extreme weather and ended up as a factory worker. In 2020, Cyclone Amphan swept his house away and now the family live perched precariously on a flood embankment.

“Frequent cyclones and other natural disasters make chaos of my life,” said Mandal.

“Natural disasters brought my life to zero, made me poorer, crippled me financially. I lost everything. My living expenses and debt burden increased a lot, now I make my living by borrowing.”

Begum 38, lost everything and she is certain the cause is climate change.

“We are tackling crises caused by climate change,” said Begum. ”Natural disasters have put an end to our normal livelihoods, we have to fight to make a living.”

Bangladesh has a small carbon footprint compared to other nations, including those in the Global North, but sees a much greater impact from the effects of global warming.

Making a case for climate action

The experience of people like Begum and Mandal may feel abstract to voters in Europe. Bloemendaal’s risk modelling, however, makes a powerful real-world case for politicians here to take action.

The message is starting to filter through and young European voters have put the climate crisis firmly on their agenda. Data from the Reuters Institute Digital News Report in 2020 reveals over 72 per cent of people in the Global South are worried about climate change. But in Northern Europe, still only half this number voice concern and in the Netherlands, the figure is 5 per cent.

Drawn up with veteran Dutch politician and physicist Jan Terlouw alongside a group of other political youth organisations, the manifesto set out nine key actions JMA wants the government to implement. One of those was calling for a ‘green’ vote in the elections of March 2021.

With current policy, both in the Netherlands and worldwide, we are not going to stop the effects of harmful climate change.

Van Wijngaarden joined other young activists who staged a public climate debate in front of the panel of judges in a lower court in the Hague.

“I know we need to take radical action,” says Van Wijngaarden, “I want a future, a future to be happy about. With current policy, both in the Netherlands and worldwide, we are not going to stop the effects of harmful climate change.”

General elections were held in the Netherlands from 15 to 17 March 2021 to elect all 150 members of the House of Representatives. The winner was the current Prime Minister, Mark Rutte and his People's Party for Freedom and Democracy.

Perhaps more effective was the court case climate activists, including JMA, brought against Royal Dutch Shell. On May 26 this year a Dutch court ruled Shell must cut its carbon emissions by 45 per cent by 2030, to meet targets set out in the 2015 Paris Climate Agreement.

The law has become a more powerful tool than mainstream politics in the fight against global warming, says Marjan Minnesma. She is the director of the Urgenda Foundation, which recently won another court case - this time against the Dutch state.

Urgenda and 900 individual Dutch citizens sued their government to require it to do more to prevent climate change. They won the case and the Dutch state is now legally obliged to limit Greenhouse gas emissions to 25 per cent below 1990 levels, by 2020.

Minnesma points to the fast reaction by political leaders to Covid-19. She’d like to see the same decisive action on climate but isn’t optimistic.

“The Coronavirus is much more tangible than CO2 emissions due to its directly measurable consequences. The link between coal-fired power plants and flooding is difficult for many people to see,” she explains.

Guided by her scientific modelling and seeing clearly the predicament her own generation faces, Bloemendaal shares this sense of urgency.

“This pandemic hopefully will be sorted out in the next year or two, but climate change is going to happen over the next 20 to 30 years,” she argues.

“If you don’t do something right now you are going to see devastating effects in the future.”

It’s not only up to young people to act she adds.

"Just because you don’t live to see it doesn’t mean it isn’t going to happen."