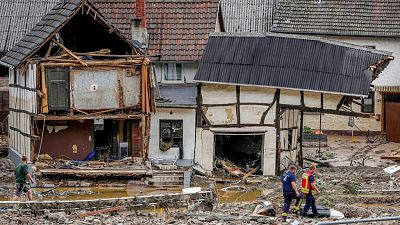 Scores of people have died and many more are missing after heavy rainfall led to severe flooding in Germany.

The states of Rhineland-Palatinate and North Rhine-Westphalia have been the worst hit with buildings and cars washed away. Chancellor Angela Merkel has called the situation a "catastrophe" and hundreds of soldiers are currently helping with rescue efforts in the region.

Record rainfall across western Europe has caused major rivers such as the Ahr to burst their banks causing widespread devastation.

Similar incidents of flash flooding have also been reported in Belgium, the Netherlands, France and Switzerland this week. Parts of London experienced one month’s worth of rain within a day, causing severe flash floods across the city.

It comes after New York experienced similarly severe flooding last Thursday as a result of Storm Elsa, with subways and highways flooded throughout the state.

As America and parts of Europe experience erratic weather patterns and record-breaking night temperatures, climate scientists are increasingly worried over the future of weather in the coming years.

How is climate change affecting flooding?

The likelihood of flooding is significantly increased due to the extreme weather patterns caused by global climate change. Changes in the geography of the land also have a part to play in increasing flooding.

With certain vegetation and other land barriers being broken down as a result of changing temperatures and freak weather patterns, many of the natural preventative measures against flooding are no longer there.

America is experiencing its hottest June on record and as a result of this heatwave, we’re experiencing higher air and water temperatures, increasing evaporation.

With increased evaporation comes increased rainfall, with longer durations as well as higher intensity and frequency too.

Evidence also suggests that temperatures increase at a higher rate above the equator, meaning countries in the Northern Hemisphere, such as America and the UK, are likely to experience more significant changes.

How can flooding be prevented?

Although flash floods may seem uncontrollable, there are several possible steps to ensuring cities and towns are protected against flooding, with rainwater being distributed in a sustainable way.

Through ingenious urban planning, cities have been able to use strategic green spaces to absorb excess rainwater for future use, therefore reducing flood risk. In China, the concept of ‘sponge cities’ has become popular, with irrigating gardens and urban farms helping to soak up excess water.

As seen in the recent London floods, sewage management became a big issue with pipes bursting due to flooding. In Europe, green roofs are another innovative solution to reducing flooding risk, with greenery absorbing stormwater run-off, and thereby preventing sewage overflow.

A common issue seen within urban flooding is the lack of drainage away from walking paths and roads as cement is unable to absorb water. An ingenious solution to this is installing permeable pavements, which can absorb water and transfer it to other sources, such as urban green spaces.