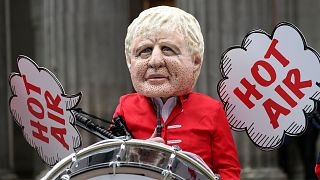 A masked Oxfam protester dresses up as Boris Johnson ahead of the World Leaders Summit at COP26   -  Copyright  AP Photo
By Ben Anthony Horton  with AP  •  Updated: 01/11/2021

The protesters were also kitted out in kilts and carrying bagpipes. Calling themselves the ‘COP26 Hot Air Band’, they performed a number of traditional Scottish songs.

Queen Elizabeth gets serious with world leaders at COP26