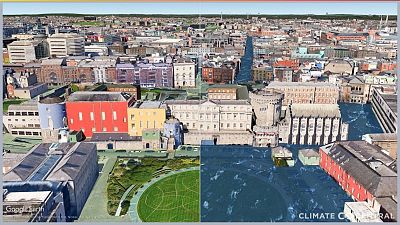 A visualisation of Dublin Castle at 1.5°C and 3°C shows the stark difference that decisive climate action will make.   -   Copyright  Climate Central
By Lottie Limb  •  Updated: 20/10/2021

Dozens of famous European landmarks could sink below sea-level if global temperatures rise by more than 1.5°C, new visualisations show.

Iconic sites like Buckingham Palace, Barcelona Cathedral and - ironically - the venue for COP26 in Glasgow could be submerged in hundreds of years due to decisions made this century.

The bleak visuals of besieged architecture are only the tip of the iceberg globally. New data from nonprofit Climate Central shows that roughly 10 per cent of the world’s population, over 800 million people, live on land which will be lost if current carbon emissions trends continue.

Using cutting-edge global elevation and population data, the scientists applied different scenarios of warming to see where communities are most vulnerable within the next 200 to 2,000 years.

Fifty major cities, mostly in Asia, would need to mount “globally unprecedented defenses” to survive, they found, while many small island nations face near-total loss of their land.

“The decisions that we make at Glasgow and the actions that we take this decade will ramify for hundreds and thousands of years,” CEO and chief scientist at Climate Central Benjamin Strauss told The Guardian.

“This group is going to be remembered for what they chose: did you choose a thriving future with a livable climate or did you choose to drown the coastal places of the world?”

Choosing the former means meeting the most ambitious goals of the Paris Agreement. By limiting global warming to 1.5°C above pre-industrial levels, sea level exposure will be reduced by roughly half, the report says.

This would enable nations to avoid building untested defenses or abandoning coastal megacities - as well as saving countless lives.

But with Earth on track to pass 1.5°C in the early 2030s - according to the latest IPCC report - deep and immediate cuts to carbon emissions are needed.

The visualisations from Climate Central show what celebrated European sites will look like under 1.5°C warming on the left, compared to a 3°C rise on the right.

These striking images show how the continent’s magnificent heritage and history is at stake while prompting us to think of the imperilled, lower-lying communities around the monuments.

You can see the trajectories facing over 180 locations around the world on Climate Central's site here.