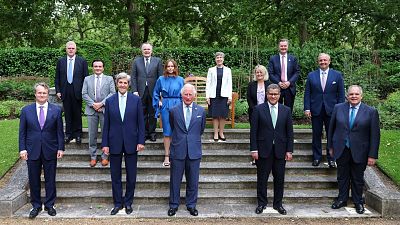 Britain will allow delegates flying into COP26 in November to avoid quarantining from green and amber countries.   -   Copyright  AFP
By Reuters  •  Updated: 10/08/2021

Britain will relax some travel restrictions to help delegates attend the UN climate conference in Scotland later this year, including a shorter quarantine period for those from "red list" countries who have been vaccinated.

Prime Minister Boris Johnson has pushed for COP26 to be in-person rather than virtual, believing face-to-face negotiations will achieve more in the battle against global warming. A UN panel said on Monday that the climate crisis was close to being out of control.

But with many countries seeing an increase in COVID-19 cases, concerns have been raised that the arrival of thousands of delegates from across the globe could see the November summit becoming a super-spreading event.

The arrival of thousands of delegates from across the globe could see the November summit becoming a super-spreading event.

A COP26 official said the measures for the summit in Glasgow would strike a balance between allowing the talks to go ahead and protecting public health, with regular testing taking place.

While many measures were based on current regulations, the official said, they would also include "specific arrangements" for Britain's traffic light system used to grade countries on their COVID risk for those arriving for the summit.

"This includes a reduced quarantine period of five days for vaccinated individuals from red list countries," the official said. "There will be no requirement for self-isolation on arrival to the UK for those coming from amber or green list countries whether vaccinated or not."

Unvaccinated people from red list countries will still need to quarantine for 10 days and delegates would be encouraged to get fully vaccinated, with Britain offering vaccines to all those registered.

There will be no requirement for self-isolation on arrival to the UK for those coming from amber or green list countries whether vaccinated or not.

A government spokesperson said the report from scientists of the Intergovernmental Panel on Climate Change (IPCC) showing that greenhouse gas levels were high enough to guarantee climate disruption for decades proved COP26 was a "necessary event".

"We know that achieving the ambitious global action needed to tackle climate change requires everyone sitting around the same table. To achieve this we have been working tirelessly to make arrangements for an in-person event," the spokesperson said.

"We believe these arrangements strike a balance between allowing critical climate talks at this exceptional event to continue with representation from around the globe, while continuing to have measures in place to protect public health."

200 million to be displaced by storms - what will happen in Europe?