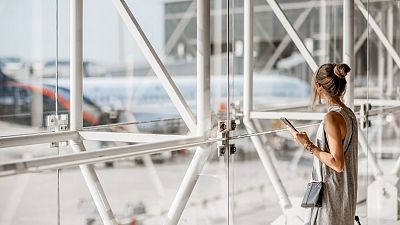 While travel outside the UK still won't be possible until at last mid-May according to the government, a consortium of airports and airlines are asking for a traffic light system to assess passenger health and get the travel industry moving again.

They are suggesting a dual-testing scheme that could be a viable alternative for international travellers.

Industry experts say testing may be useful in both reducing imported cases and in monitoring and reducing the risk of introducing a critical mass of a variant of concern.

Michele Granatstein, partner and Head of Aviation at economics consultancy Oxera, says the current policy has served us well in terms of reducing risk of infections from international travellers, but authorities should be looking at how to reopen international travel safely.

"It is important to consider how we can reopen travel in a way that minimises the risk to public health and allow us to reopen travel safely, but at the same time minimises disruption and costs to travellers, the economy and the aviation sector more generally," she said.

Granatstein added that such a scheme will not be in place overnight and that it would take months to initiate such a scheme, particularly as circumstances change in other countries were new COVID-19 infections continue to rise.

Watch Euronews's full report in the media player above.

Flight to Nowhere: Ukrainian passengers use a plane for sight-seeing Kiev