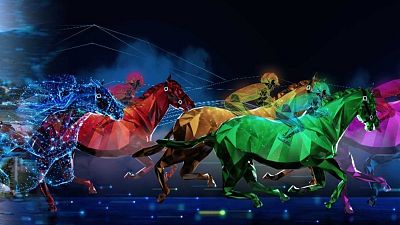 NFTs have existed for over half a decade but have found their place in tech since the beginning of this year, having permeated art, music, and most recently, sport.

The latest chapter of the crypto-boom is leading to thousands of people racing digital horses.

At the forefront of this is ZED, a platform opening users up to virtual horse breeding, purchasing, and racing through the use of Non Fungible Tokens (NFTs).

This means the animals are only ever owned in a virtual reality, powered by secure blockchain technologies.

It’s creators, Australia-based tech studio Virtually Human, got in on the NFT game earlier than most, launching the platform back in 2019. It was an instant success, selling over 4,000 horses at the value of €25 each.

Now, the eyes of environmental activists and e-Sports enthusiasts are firmly on these trends to see just how far crypto could go in reshaping our culture.

And they have every reason to do so - ZED’s popularity has soared to such highs that newly “launched” rare horses can sell for as much as €12,000. One horse recently sold for over $125,000 (€103,000) and this is expected to escalate even further as the rising value of NFTs redefines our way of experiencing tech.

How does digital horse breeding work?

Zed is able to function due to its use of blockchain technology that allows racers and breeders to pay for their purchases via cryptocurrency. This particular set up is powered by Ethereum - it comes second to Bitcoin as far as market leaders are concerned, but is marginally better for the environment.

New horses are “bred” through bloodlines traced back to the original 4,000 and kept in “stables” contained within an entire sci-fi inspired world. Races are conducted on neon landscapes where the animals are rendered for maximal realism - bar appearing in a rainbow of different colours.

Developers maintain that the first and subsequently the most expensive generation will consist of 38,000 horses that are released in “drops”. Users can go on to either race or sell the horses via a secondary marketplace built for NFT transactions.

Prizes for free and paid races range from a few euros to several thousand.

This is the best @zed_run video clip on the internet.

Could ZED be a win for animal welfare?

ZED serves an environmental purpose from an animal welfare perspective. Charities far and wide have campaigned for the end of using “animals for entertainment” in any capacity.

“Behind the romanticized façade of Thoroughbred horse racing is a world of injuries, drug abuse, gruesome breakdowns, and slaughter. While spectators show off their fancy outfits and sip mint juleps, horses are running for their lives,” states People for the Ethical Treatment of Animals (PETA).

There is a guarantee that no animals are harmed in the process.

Platforms like ZED enable fans of horse racing to indulge in the sport without concern for these implications. Though its developers are in the process of debating whether their virtual horses should be granted a lifespan, there is a guarantee that no animals are harmed in the process.

The environmental implications of this technology are complex

One of the main environmental critiques of the technology used by all NFT owners is the amount of energy they need to function. Wired reports that “an NFT sale on Ethereum can result in the consumption of as much as 8.7 megawatt-hours of electricity, more than twice what an average British household consumes in one year”.

In the context of ZED’s transactions, that is a lot of energy.

A rethink of this kind of tech is in the works in order for it not to have such dire implications for the planet.

‘Green’ cryptocurrencies and clean energy may provide some of the answers, but the onus is ultimately on Ethereum to fulfill their promise of making their technology more environmentally friendly as they build their highly anticipated follow-up blockchain.