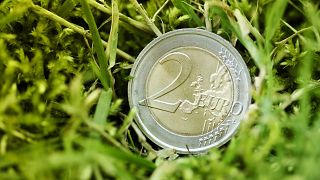 You’ve probably heard about Bitcoin, Ethereum or even Dogecoin, but getting to the bottom of how they work isn't easy. So what is a cryptocurrency?

Put simply, it is a kind of virtual money. So unlike other forms of currency, there are no physical coins or notes to carry around. Instead, transactions happen online and are secured by a digital record, called a ledger, which is distributed to a network of computers that can be located all around the world. Once a transaction is put in the ledger it can’t be changed and past entries can’t be tampered with.

Every change has to be verified by every computer using a complex mathematical puzzle making it nearly impossible to forge transactions. The technology behind this security infrastructure, “blockchain”, was developed in 2008 by Satoshi Nakamoto for what is now the most successful cryptocurrency, Bitcoin. So promising is this secure system that finance experts, including Forbes, have claimed that “the fourth industrial revolution” is set to be “built on blockchain”.

Not having a central location for the record of transactions ensures security but also means that cryptocurrencies can stay outside of the influence of government interference or manipulation. This freedom has led to questions about the possibility of it being used for illegal activity, but better way of looking at it is that it releases virtual money from many of the destructive constraints of established value systems.

EcoCoin is a cryptocurrency linking wealth to the environment

A group of organisations have come together to form a charity hoping to use this innovation to change how we think about what has value. ECOCoin incentivises users to carry out sustainable actions. The more environmental good you do, the more coins you get.

ECOCoin hopes to attach wealth to helping the environment, rather than hurting it. In development since 2009, the platform would see people getting paid for things like riding a bike to work or choosing a meat-free lunch. Based on how much time, energy and impact each of your actions have, ECOCoin rewards you for living an eco-conscious lifestyle.

It claims that every coin is backed by one tree. That means that where traditionally monetary value has come from the exploitation of natural resources, the currency wants to help restore them. “It seems strange that businesses can make money from cutting down the forest and turning it into a raw material, but people are not paid to plant the forest,” the company said in when the new currency was first announced.

“We know money is a great way to incentivise people so what if we could design a new system that rewarded people for their actions, not only to limit damages but useful to improve our ecology?”

To start with, the currency would only be able to be spent in a dedicated sustainable marketplace. Organisations looking to support sustainable action, a festival hoping to change the behaviour of their attendees, for example, would purchase ECOCoin with legal tender like euros or pounds. They could then use this ‘money’ to engage people in short term environmental action, like picking up plastic cups on the floor. Those people could then use ECOCoin to purchase food drink or experiences from vendors at the festival. This is just one example, but it is hoped that it could spread to other spaces like offices, universities or hotel chains.

Outside of simply paying people to do good, these new forms of money present other ways to bring about substantial environmental benefit. Larger cryptocurrencies, such as Bitcoin, can rely on millions of computers in a vast network to keep them secure. Systems like this use a lot of energy and being spread across the globe there is no guarantee of where this is coming from. The Cambridge Bitcoin Electricity Consumption Index estimates that Bitcoin alone could be using around 87 terawatts per hour every year; more energy than the entirety of Finland.

The potential flexibility of a cryptocurrency, however, means that this astronomical demand for energy could drive big changes in renewable energy use. Electricity can make up to 70 per cent of the total operating costs for those who keep the digital currency running, according to Bitcoin Magazine. Cheap energy sources are a big consideration. As an online operation, location is not a constraint meaning that those running the network chase cheap renewable alternatives like hydropower.

Genesis Mining, a company that allows customers to “mine” or earn Bitcoin by carrying out the complex computations that back the currency, has shifted its entire operation to Iceland. The country has abundant hydraulic and geothermal power supplies sourcing 100 per cent of its electricity from renewable sources.

Switching what is essentially the entire electricity requirements of a whole country to more environmentally friendly alternatives could have the potential to change energy markets around the world. It isn’t quite the drastic planet-saving solution we need just yet but some industry experts think that the rise of cryptocurrencies could drive the next big green energy revolution.