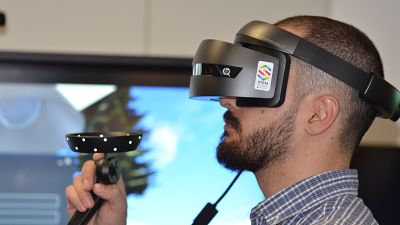 A new lightweight virtual reality device has been created that would allow users to touch objects at shops and museums without ever having to go there in the flesh.

The limits of virtual reality (VR) have been stretched in the last five years. The technology has become the medium of choice for game developers, artists and actors alike, seeing a real boom in projects that bring us alternate realities during enforced social isolation. Through immersive audio and visual landscapes the ability to visit mindblowing locations, real or not, is on the brink of becoming an affordable option for many.

Nowadays, what you see and hear in virtual reality is not so dissimilar from actually visiting these places. However, up until now, the experiences did not give us the ability to interact with surrounding environments.

A team at the Carnegie Mellon University (CMU) in Pennsylvania, US have created a new device that uses ‘haptic feedback’, a technology which simulates the sensation of touch to make the virtual experience seem more real.

Where other devices might use a series of expensive, power-hungry motors to give the sensation of touch, CMU’s design uses a simpler mechanical solution. From a shoulder-mounted system, a string is attached to each finger, giving resistance based on what the user should be feeling. A spring-loaded mechanism is combined with an electric latch that stops the hand from moving further as it makes contact with heavy objects in the virtual world.

The team says it could be available to the public for less than €50.

According to user research carried out in development, this method provides more realistic sensations than other haptic techniques despite being cheaper and more lightweight than other available options. The team says it could be available to the public for less than €50.

"I think the experience creates surprises, such as when you interact with a railing and can wrap your fingers around it," says Cathy Fang, co-author of the study. "It's also fun to explore the feel of irregular objects, such as a statue." This means the system would be suitable for experiences that involve interacting with physical objects like museum visits or shopping at a furniture store, she explains.

Immersive virtual experiences have been highlighted as an effective tool for education surrounding climate change. Research has consistently found that virtual experiences can be psychologically impactful as people process them as though they are real. One study carried out in the US in 2018 demonstrated that virtual reality could be used to effectively show participants the extreme environmental outcomes of climate change. Instead of visiting somewhere and contributing to the problem, simulated experiences could offer a similar educational experience without the need for travel.

Innovative solutions are needed to facilitate public education around climate change. The opportunity to learn through “doing and being” brings problems closer to home through VR making people feel more personally involved in the issues facing our planet. Although haptic feedback has not yet been seen to improve the learning experience gained from VR, a more affordable and accessible system could create new ways for museums and organisations to engage with the public.

Software and algorithms are key to Dubai's vertical growth