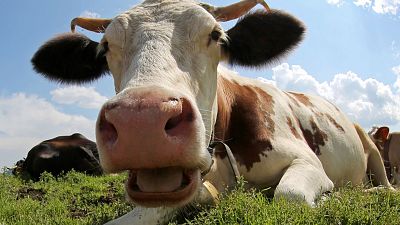 Named Mootral Ruminant, the supplement was created by company Mootral and reduces methane released by cows by up to 38 per cent. . Dubbed as the ‘Tesla of cows’ the product could be a game changer for the agriculture industry which is set to be under fire at COP26 this year.

Mootral’s founder and CEO Thomas Hafner is hoping to receive funding that will mean he can make the feed available around the world at no cost to farmers.

Mootral will in turn sell ‘CowCredits’ to companies to off-set their emissions. The credits will also be available as part of the Carbon Offsetting and Reduction Scheme for International Aviation (CORSIA).

It is estimated that there are 1.5 billion cows with those animals producing 4.6 gigatonnes of CO2 equivalent emissions annually.

What is carbon offsetting?

Carbon offsetting involves paying money which is invested in green projects such as reforestation to offset carbon use, the practice is already relatively common in aviation.

The global carbon offsetting market is estimated to be worth €178 billion and grew by 34 per cent in 2019.

One CowCredit equals a reduction of one tonne of CO2 equivalent and is unique on the market in being the only carbon offset which uses cattle farming.

The Methane produced by cows is 84 times more potent as a greenhouse gas than carbon dioxide in the first 20 years after release.

Livestock are responsible for 14.5 per cent of greenhouse gas emissions with cattle making up the majority of this at 65 per cent.

If all 1.5 billion cows in the world ate the feed it would reduce methane emissions by the equivalent of removing 330 million cars from the road. The current total number of cars in the EU is 240 million.

Mootral Ruminate is used for commercial dairy farms in the UK that supply high-end coffee chains and has pilots taking place in Europe and the US this year.

Hafner says, “Cows play an important role in our ecosystem, improving soil quality and supporting carbon sequestration, as well as providing a great source of nutrition.

“It’s time for us to help them become part of the solution in the global fight against climate change.

“Mootral is a scalable technology that opens a window of opportunity to avert climate catastrophe while we decarbonise the economy.”