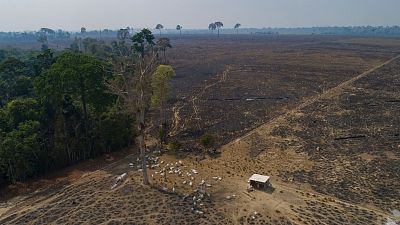 The EU is one of the world’s largest importers of tropical deforestation and the carbon emissions associated with it, second only to China.

A new report from the WWF has found that 16 per cent of tropical deforestation from international trade was linked to EU imports in 2017, the last year for which data is available. That’s a total of 203,000 hectares and 116 million tonnes of CO2 caused by products and commodities brought into EU countries.

Eight of the largest economies, including Germany, Italy, Spain and Netherlands, were together responsible for 80 per cent of the EU’s embedded deforestation between 2015 and 2017.

The European Commission is set to present a new proposal for legislation to tackle deforestation this spring. WWF says the report emphasises the “urgent need” for strong and effective laws to address the EU’s global environmental footprint.

It says that they should prevent any product that has contributed to the destruction of nature, either ‘legally’ or illegally, from entering EU markets.

Q: How much does the EU contribute to tropical #deforestation?

Anke Schulmeister-Oldenhove, one of the report’s lead authors, says that the bloc needs to lead in encouraging countries with ambiguous regulations to address the underlying drivers of deforestation and human rights violations.

“We want clear legislation that ensures products cannot be placed on the market if they are very high risk and those risks cannot be minimised,” she tells Euronews Living.

“They [companies] should at least be able to ask their suppliers, can you tell me where this came from, do you know what the supply chain is. If not, we think that might be a challenge they need to address.”

Should we be looking to buy deforestation-free products?

Some of the commodities with the largest destruction of tropical forests were soy, palm oil and beef. But, Schulmeister stresses, the burden of reducing deforestation shouldn’t lie with consumers.

“The decision on whether I choose something which is deforestation-free or not, should not be on our shoulders. But I think we also need to think about what goes beyond that. One of the challenges is that we have an issue, I think, with overconsumption of meat.”

Removing the burden from individuals, however, doesn’t mean that transparency and awareness are not important.

Almost 1.2 million people joined an EU public consultation on deforestation in 2020 after a campaign from a group of NGOs, including WWF. It was the largest participation for an environmental topic in the history of the EU.

Providing the information necessary for people to understand what products are linked to the destruction of nature and potential human rights violations is also part of the solution - even when that link might not be obvious.

“About 80 per cent, or more of what the EU imports for soy is to feed livestock," says Schulmeister.