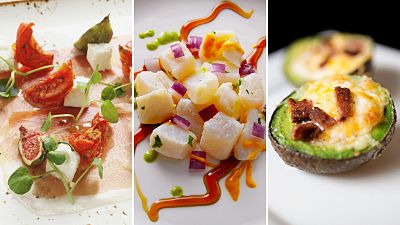 The Michelin Guide is known for its prestigious rating of the world’s best restaurants.

Created by two French brothers at the start of the 20th century, it has become the most revered haute cuisine handbook anywhere in the globe. One, two or three stars are awarded to establishments for excellence in the field.

This year, a new symbol has been added to the guide, in the form of a green, four-leaf clover. The clover recognises sustainable gastronomy and points out restaurants that are taking responsibility for the conservation of resources and the protection of biodiversity. A switch to renewable energy is also taken into account.

The decision to introduce the green clover in 2020 came after Michelin inspectors, who review restaurants for the guide, became more conscious of chefs who were making an effort to adopt sustainable practices in their kitchens. The permaculture gardens at three-Michelin starred restaurant Mirazur, in the South of France, was one such initiative that first stood out to the judges.

“Faced with constantly evolving challenges such as production methods, sourcing, and waste management, chefs are striving to improve their practices,” said @gwendalpoullennec, International Director of the MICHELIN Guide. That's why for the first time, the MICHELIN Guide is putting the spotlight on those chefs who support more sustainable gastronomy and who adopt sustainable practices in their kitchens ♻ The new emblem, unveiled during the MICHELIN Guide France 2020 selection ceremony, will highlight restaurants that promote sustainable dining on our website. ©️Chef portraits by @alice.vdw . . #MICHELINSustainability #MICHELINGuide #MICHELINrestaurants #chef

So far, over 50 restaurants have been awarded the green clover in the latest edition of Michelin Guide France. Most recently, in the Great Britain and Ireland Guide, the sustainability award was given to chef Enda McEvoy of one-starred restaurant Loam in Ireland.

“Often, these initiatives combine the best of the knowledge of our predecessors with the creativity and innovation of chefs who are never short of ideas. The ambition of our approach is to amplify the scope of the good and ingenious practices of chefs by putting them in the spotlight. The ideas, methods and know-how developed by these chefs will thus help raise awareness of an entire sector to its customers and the general population.”

How does the Michelin star system work?

The dining star system was born in 1926 and, ever since, has been selectively applied to food establishments under the following terms.

Inspectors are anonymous, meaning they do not identify themselves when they arrive. Their meals and expenses are paid for by Michelin.

The Michelin Guide also awards the ‘Bib Gourmand’ to a handful of establishments, which gives lower priced restaurants a chance to feature. The ‘Bib Gourmand’ would suggest somewhere with "exceptionally good food at moderate prices". Restaurants must offer menu items priced below a maximum determined by local economic standards.

Many Michelin-starred restaurants around Europe are vegan or vegetarian.

Joia, in Milan, Italy was the first vegetarian restaurant in Europe to receive the accolade. Pioneering chef Pietro Leemann’s philosophy of ‘natural cuisine’ came from travelling extensively throughout Europe and Asia. Joia’s menu doesn’t use meat and is made up of dishes featuring completely organic produce.

In Vienna, Tian is Austria’s hottest veggie eatery and boasts one Michelin star, while L'Arpège, in Paris, is one of very few plant-based restaurants with three Michelin stars to its name.