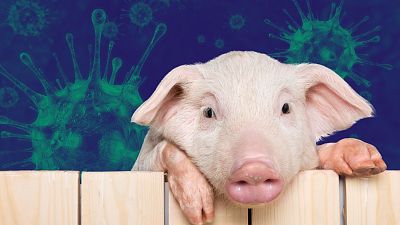 A group of British doctors has backed a call for the end of factory farming to prevent future pandemics like COVID-19.

With the recent discovery of a new strain of flu with "pandemic potential", the link between eating meat and global health is becoming more common in the discussion about how global health crises are prevented in the future.

Evidence of infections in people who worked in abattoirs and the pig farming industry found that this new flu strain, known as G4 EA H1N1, has been common in workers in China since 2016. Researchers are now concerned that this virus could mutate to easily spread from person to person causing a global outbreak.

Professor James Wood, head of the Department of Veterinary medicine at the University of Cambridge told the BBC that the research "comes as a salutary reminder" about farmed animals as a source for viruses with the potential to cause a pandemic.

Dr Gemma Newman from the non-profit Plant-Based Health Professionals led a plea for the public to give up eating meat earlier this year as part of the ’No Meat May’ campaign. A record number of people took part with 33,000 sign-ups, compared to 10,000 in 2019.

Of those who have signed up, a survey carried out by the campaign found that 38 per cent did so because of concerns surrounding the meat industry and diseases like COVID-19.

Hannah Bradshaw, one of the 23,000 new participants, said these concerns were certainly a part of her decision to give a plant-based diet a go. ”There is more information about the meat industry causing diseases than ever before and stronger links between the impacts on our health compared to a meat-free diet.”

It is hard to say whether the pandemic had a direct impact on people’s pledges, explains campaign co-founder Ryan Alexander, but “it’s clear that people are making the connection between intensive factory farming and public health concerns.”

What’s the problem with meat?

Zoonotic diseases, like Covid-19, are those that can spread between animals and humans. Worldwide they have been the cause of many historic outbreaks including H1N1 and Ebola. There is little evidence, however, to suggest that eating less meat directly reduces the occurrence of deadly disease outbreaks.

The most important factor, according to the UN Environment Program, is instead an increased amount of close contact between humans and animals like pigs, bats or birds which allows pathogens to jump between species. In 2016 it identified increasing encroachment of animal agriculture into natural ecosystems as a driving factor of zoonotic diseases warning that the “livestock revolution” could lead to a potential disaster.

“Some politicians and commentators blame China for Covid-19, but they do not mention that all of the recent major disease outbreaks have been caused by tampering with animals and their habitats,” says Dr Newman, “our chicken salad or pepperoni pizza could be the next big health risk.” Industrial-scale factory farms are like “a ticking time bomb”, she adds, and shifting our diets away from meat could help move towards a “safer future”.

Consultant Haematologist and Director of Plant-Based Health Professionals UK, Doctor Shireen Kassam believes there is an “urgent need” to reduce our meat consumption for both human and planetary health.

A healthy plant-based diet is associated with some of the lowest rates or chronic disease and a longer life.

“More than 90 per cent of the meat we consume is produced in industrial scale factory farms, which provide the perfect conditions for the generation of novel infections with epidemic and pandemic potential.” Factory farming also requires the widespread use of antibiotics, he adds, which has contributed to “a dramatic rise in the number of antibiotic-resistant infections affecting humans.”

“We have now entered an era where it is not uncommon for doctors to find themselves treating patients with bacterial infections for which there are no effective antibiotics.”

Dr Kassam explains that it is also a matter of overall public health. “We have known for decades that a healthy plant-based diet, which minimises or eliminates meat, is associated with some of the lowest rates of chronic disease and a longer and healthier life.”