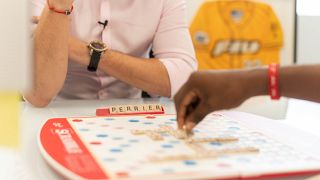 The French version of Scrabble may be set for a makeover in the new year with the game owners, Mattel, eyeing a number of revisions to remove "offensive words."

The American company could make the changes - similar to ones already made to the English-language version - to 'L'Officiel du jeu du Scrabble,’ the official dictionary for the game from 2023.

What words were removed from the Scrabble handbook?

In 2020, amid widespread protests in the US and beyond in response to the death of George Floyd, Mattel announced changes to the Scrabble handbook.

“We looked at some of the social unrest that’s going on globally,” said a Mattel representative at the time.

“I’ve heard the argument that these are just words, but we believe they have meaning.”

No official list was ever released with players finding out if words were banned when they attempted to use them in the online game.

“P*ff,” “n*gger” and “w*g” were all banned along with “jesuitic,” “fenian” and ''shiksa”, a yiddish word for non-jewish women which is deemed derogatory.

Words which are offensive but deemed to have dual meanings like “bitch” (a misogynistic slur against women but also meaning a female dog) and “faggot” (a slur for a gay man that was originally a name for a bundle of sticks) are still permitted.

The move to "change the rules" of the beloved board game for socially progressive reasons provoked a predictable backlash in some quarters.

Mattel insisted that they were pursuing the changes to keep the game "culturally relevant"; however, cries of censorship ensued from players and commentators.

"Words in dictionaries and Scrabble lists are not slurs,” said author Darryl Francis, who was involved in creating the original Scrabble word list in the 1980s.

"They only become slurs if used with a derogatory purpose or intent or used with a particular tone and context. Words in our Scrabble lists should not be removed for PR purposes disguised as promoting some kind of social betterment."

However, independently of Mattel, the North American Scrabble Players Association (NASPA) had already removed several slurs from their tournaments the previous year after a consultation with members.

The reaction to the move in France may be similarly mixed, as the country slides deeper into a culture war over 'le wokisme'.

The new version of 'L'Officiel du jeu du Scrabble' should be available in June 2023.

Why are the Brits censoring a classic Christmas song? Again

Why the French are saying "non" to gender neutral pronouns