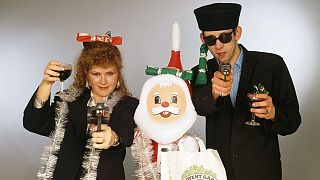 Kirsty MacColl and Shane MacGowan getting into the festive spirit   -   Copyright  Getty Images
The opinions expressed in this article are those of the author and do not represent in any way the editorial position of Euronews.
By David Mouriquand  •  Updated: 22/12/2022

It’s the same struggle every year at Christmas time: that sinking feeling that your ears will once again be assaulted with Mariah Carey’s 'All I Want for Christmas Is You'.

There’s nothing we can do it about it at this point. It’s Mariah’s month and we just live in it.

However, there is another Christmas tune we should be talking about: The Pogues’ ‘Fairytale of New York’, which is once again under attack under the guise of “protection”.

Indeed, the BBC is at it again and BBC Radio 2 has become the latest station to censor Anglo-Irish Celtic punk band The Pogues’ beloved 1987 Christmas song, following BBC Radio 1’s previous censoring of the song in 2020.

This is hardly new, as every festive season, the song sung by Shane MacGowan and Kirsty MacColl comes under fire for its language, specifically the use of the homophobic slur “faggot” and the word “slut”.

The annually debated lyrics are in the following verse:

You're an old slut on junk

Lying there almost dead on a drip in that bed

You scumbag, you maggot

I pray God it's our last

A chronicle of offense

The list of baffling censorship with regards to ‘Fairytale of New York’ is intense.

The song was censored in 1987 by the BBC for live performances on Top of the Pops, including the line “Happy Christmas your arse / Thank God it’s our last”; and again in 1992 when the word “faggot” had to be turned into “haggard”.

ITV bleeped it in 2005 and BBC Radio 1 edited the words “faggot” and “slut” to “avoid offense” in 2007, while the traditionally more conservative Radio 2 continued to play the original version. The BBC later reversed this decision, following a huge public outcry.

RTÉ, Ireland’s state broadcaster, tweeted about their discomfort with the lyrics in 2018, calling for the word "faggot" to be bleeped out; thankfully, RTÉ pledged to continue to play it on its radio stations "without omissions".

In 2019 and 2020, the number of complaints led BBC Radio 1 to bleep “faggot” and “slut”, while BBC Radio 2 stood firm once more and played the whole song without censored words.

Finally, this year, BBC Radio 2 has given in to the calls for censorship and an alternative version with MacColl singing "you're cheap and you're haggard". This was the version included for the official Marvel soundtrack of the 2022 special short film The Guardians of the Galaxy Holiday Special.

So you should be - and that’s just the abridged version.

In a statement, Radio 2 claimed: “We are reflecting what we are hearing back from many of our listeners who love the song, but find some of the lyrics jarring in 2022.”

It’s hard to believe, considering ‘Fairytale of New York’ is the most-played Christmas song in the UK and has been in the Top 75 every December since 2005.

The Pogues’ frontman Shane MacGowan has previously defended the use of the offending words in his achingly sad ballad, due to the characters in the song not being “angels” or “even decent”.

“The word was used by the character because it fitted with the way she would speak and with her character. She is not supposed to be a nice person or even a wholesome person,” said MacGowan in 2018, about the character who sings those lyrics. “She is a woman of a certain generation at a certain time in history and she is down on her luck and desperate.”

“Not all characters in songs and stories are angels or even decent and respectable. Sometimes they have to be evil or nasty in order to tell the story effectively,” he added.

Considering the song is essentially about an increasingly inebriated couple (performed by MacGowan and the late MacColl) fighting, as well as broken dreams and shattered hopes, it fits.

Additionally, many have pointed out that there is clearly no homophobic intent behind the lyrics and that the word "faggot" was once used as slang to mean lazy or useless in Ireland.

An act of “cultural vandalism”

Let’s face facts – this is getting ridiculous now. Do the BBC have no other turkeys to stuff right now?

Art is supposed to break barriers and provoke, and taking offense at words out of context ends up altering an art form. Sanitized versions are not only wrong but potentially dangerous.

The BBC continue to show a level of puritanism that simply doesn’t exist anywhere else in Europe - much less for a Christmas song; it's a form of patronizing oversensitivity that is usually expected from the US (more on that later).

At this point, the Brits are just making utter fools of themselves. Especially considering that their actions will hopefully backfire and kick off another instance of the Streisand Effect, which shows that attempts to remove or censor information often have the unintended consequence of increasing awareness of that information. Hopefully more people will listen to and download the original version this Christmas in order to bypass the childish actions of an organization that should really know better.

And once again, considering the fact that ‘Fairytale of New York’ is the UK’s most-played Yuletide bop of the 21st century and is frequently cited as the best Christmas song of all time in UK and Irish polls, it really comes down to one simple equation for the BBC: either play the original song or don’t play it at all.

Songs can be flawed, but their lyrics must be protected. Altering and mutilating them destroys their soul and is nothing short of an act of “cultural vandalism”, as the Irish journalist Ella Whelan brilliantly summarized.

And as the ever-literate and wonderful Nick Cave wrote in 2020 in his Red Right Hand Files newsletter, in a way that singularly dwarfs anything this article could ever hope to achieve:

"The idea that a word, or a line, in a song can simply be changed for another and not do it significant damage is a notion that can only be upheld by those that know nothing about the fragile nature of songwriting.

The changing of the word ‘faggot’ for the nonsense word ‘haggard’ destroys the song by deflating it right at its essential and most reckless moment, stripping it of its value. It becomes a song that has been tampered with, compromised, tamed, and neutered and ca no longer be called a great song. It is a song that has lost its truth, its honour and integrity — a song that has knelt down and allowed the BBC to do its grim and sticky business.

The BBC, that gatekeeper of our brittle sensibilities, forever acting in our best interests, continue to mutilate an artefact of immense cultural value and in doing so takes something from us this Christmas, impossible to measure or replace. On and on it goes, and we are all the less for it."

You can - and should - read his beautifully penned full statement on 'Fairytale Of New York' here.

The United States Vs Christmas

As stated earlier, the BBC have continued to display some pearl-clutching that has usually been reserved for the US, who have a long rap sheet when it comes to banning Christmas songs.

Here are just a few examples of artists who got blacklisted by Radio DJs:

First performed by a 13-year-old Jimmy Boyd in 1952, ‘I Saw Mommy Kissing Santa Claus’ is a festive number that tells the story of a child who witnesses his mum having an affair with Father Christmas and then realizing that it’s his dad dressed up. The Boston arm of the Roman Catholic Church weren’t too pleased about the birth of Jesus Christ being associated with the shocking act of kissing; this led to radio station boycotts. It’s only when Columbia Records explained to the Archdiocese that the Santa in the song is actually the father in disguise that the ban was lifted in time for the following Christmas.

Elvis’ 1957 version of Irving Berlin’s ‘White Christmas’ was banned when a judge in Jacksonville accused the singer of “undermining the youth of America”. His inoffensive cover song and the festive album was therefore banned and a DJ in Portland was even fired for playing ‘White Christmas’ on his show.

Frank Loesser’s beloved 1959 classic ‘Baby, It’s Cold Outside’ was considered shocking at the time, because the idea of blaming the weather so that a person could spend the night outside of wedlock was too much of a taboo. In recent years, the song has been banned by several US radio stations (in 2018) because of its “creepy” lyrics, as the song does not promote consent, with lines like “the answer is no” raising eyebrows.

This was parodied in a brilliant sketch by Key & Peele:

So, while it’s easy to snigger at others, the BBC’s clockwork act of censorship with regards to ‘Fairytale of New York’ just means that even in 2022 - when we should really know better in countries which pride themselves on championing free speech - defending the works of artists against any form of censorship remains depressingly vital.

So, Happy Christmas your arse, I pray God it's our last.

Nativity scenes from around the world on display in St. Peter's Square

Why are these Middle East countries censoring Netflix?