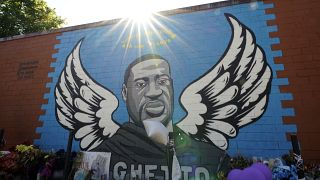 A biography of George Floyd, whose death sparked protests across the globe last summer, has been announced for Spring 2022.

The book will be written by two Washington Post reporters and will expand on the media outlet’s award-winning series “George Floyd’s America”.

Robert Samiels and Toluse Olorunnipa will author "His Name Is George Floyd: One Man's Life and the Struggle for Racial Justice," covering Floyd’s life from his family history in the tobacco fields of North Carolina to his murder last year in Minneapolis by a white police officer.

The book will be published by Viking and released next May.

Commenting on the announcement, Olorunnipa said: "George Floyd's gruesome, videotaped death changed the world, as millions were moved by the raw humanity of a dying man pleading for air,"

"As we've examined his life over the past year, we've learned how his struggle to exhale as a Black man in America began decades before a police officer's knee landed on his neck."

Last year George Floyd’s death sparked protests across 140 US cities and countries around the world as the Black Lives Matter movement was mobilised in response to police brutality.

Derek Chauvin, who murdered Floyd by kneeling on his neck as he was handcuffed on the floor, is now in jail after a high-profile trial earlier this year.

The city of Minneapolis, where Floyd lived, began a rethink of its police department in the aftermath of the attack. Voters in the city recently rejected replacing the police department with a Department of Public Safety, by a small margin of less than 10%.