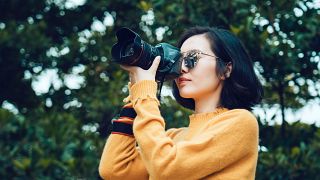 Kodak’s film finishing factory in Rochester, US, was running at 24/7 capacity and having hired 350 people in the last year the company needed 100 more to keep up with increased demand related to film photography.

“Our film business is seeing a resurgence because demand has increased significantly in both photo and motion picture film,” Kodak’s communications director Kurt Jaeckel told Euronews Culture via email.

“Many amateur photographers have rediscovered film as part of the trend toward analog technology and many directors and cinematographers prefer the look of film for everything from music videos to feature movies.”

In recent years vinyl unexpectedly made a comeback, with even cassette tapes enjoying a resurgence.

Is film photography part of this trend?

Over the summer two women at Notting Hill Carnival were captured on camera by a street photographer. The touching image of them with their two babies went viral on TikTok, eventually finding its way to the women in the photo.

“That was quite lovely just walking by and capturing the moment,” says Yossy Akinsanya who took the photograph on her 35mm point and shoot.

“It’s exciting to document, people attending, the friendship, the culture and the moments of people being really happy,” says the street, documentary and travel photographer who began her film journey after the death of her aunt.

“I just realised I don’t have any moments documented with her to look back or hold close,” she says.

Akinsanya’s yearning for a more permanent, sentimental approach to capturing photographs is reflected in the social media landscape.

Gen-Z social media app of choice TikTok is filled with content creators advocating for the benefits and aesthetics of film photography. Influencers and celebrities have also gotten in on the act with model and reality TV star Kendall Jenner even using a film camera to document the Met Gala.

While the film photography industry has been hit hard by supply chain issues related to the pandemic Akinsanya blames increased demand for the price hikes and difficulty buying her favourite Kodak gold.

“It has definitely been a lot harder. I have had to sign up to email alerts for when they have it in,” she says.

Wildlife photography in the digital age

The irony that sentimental photographs that last a lifetime are being popularised on an app like TikTok is obvious. However, the proliferation of digital cameras that many remember from the 2000s appears to have fallen by the wayside with the advent of the smartphone.

This split second photography is what Akinsanya was trying to get away from and also presents issues for more seasoned photographers.

Graeme Purdy has been travelling the world for 20 years as a wildlife photographer and is candid about the difficulties the current digital and information ecosystem poses.

“In the 80s or 90 a portrait of a lion - people hadn’t seen that before. A picture of an elephant was kind of cool, but now they're so ubiquitous. How can you photograph an elephant or a lion that would excite people?”

During COVID-19 lockdowns Purdy returned to his first love of film photography, taking the opportunity to relive his memories of the darkroom as a schoolboy. After reminiscing with a 35mm camera he soon moved to larger formats.

“I relearned everything I had forgotten about film photography,” he says.

Purdy eventually took a GX17 on a trip to Kenya to photograph elephants, balancing the enormous camera on a beanbag in the back of a Land Rover to get his shots and setting his exposure using an old-fashioned viewfinder.

He was able to take 15 photos a day compared to the thousands of his companions using phones and digital equipment.

“I was caught up in the emotion of it. That motivates me, that is part of what makes a film exciting. You’re going to take better pictures if you’re motivated and excited.”

A return to film photography might seem odd in a digital age but in the current iteration of social media it makes a lot of sense.

The noughties saw an era of mass uploads of photos taken with a digital camera to Facebook. Today professional and amateur photographers alike upload videos of them using their analogue cameras to TikTok. The cameras themselves are not simply ways of taking images but become part of an aesthetic through the medium of video.

The technical elements of film photography may be exciting but their appeal as legacy and nostalgia items are more so.

For Purdy, who specifically references the ‘hipster trend’ in amateur photography for the rise of film use, the technical elements are exciting but the nostalgia even more so.

“I find the romance and history behind the equipment exciting. That gets me out of bed. I do projects because I wanted to use the camera.”

A yearning for the past is reflected by Akinsanya.

“People want to document moments like our parents did with photo books back in the day,” she says.

Who was honoured at the 2022 Royal Society Photography Awards?