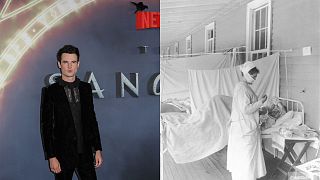 Encephalitis Lethargica which features on Netflix show 'The Sandman' was a real pandemic that happened around the same time as Spanish flu   -   Copyright  AP/Reuters John Rainford/Library of Congress
By Tim Gallagher  •  Updated: 26/08/2022

“Some begged for sleep that wouldn’t come, whilst others lived as perpetual sleep walkers.”

Netflix’s latest sci-fi outing ‘The Sandman’ has received rave reviews for its fantasy frolics but it features one factual plot point some viewers may have missed.

The show, which is based on a comic book of the same name, stars Tom Sturridge as Morpheus or ‘Dream’ who rules the Dreaming.

Dream is responsible for creating the dreams and nightmares of humanity, and is one of the seven ‘Endless’ - which include Desire, Delirium, Death, and Destiny - all of whom perform similar eponymous functions.

A problem arises when the dastardly Roderick Burgess, or ‘Maegus,’ traps Dream in the mortal realm using an occult ritual. In Dream’s absence the Dreaming falls into ruin and many humans are afflicted by a mysterious illness as a result.

Morpheus is entrapped in an enormous glass sphere in the Maegus’s basement for over a century and during that time the ‘sleeping sickness’ is eventually named encephalitis lethargica by doctors.

This illness, which causes fatigue, insomnia, and apparent comas in the Netflix show is far from fantasy. In fact it was a real sickness that affected people in the same timeframe that the plot of ‘The Sandman’ takes place in.

What is encephalitis lethargica?

Morpheus is captured by Maegus and his creepy chanting crew in 1916. The incident, which happens during the course of World War I, is in fact an accident on the part of Maegus who intended to trap Death, hoping to force them to return his son who died in battle.

The first case of encephalitis lethargica (EL) in the real world was recorded in 1917. The pandemic, which went on until 1927, was the first global health crisis of an attack on the central nervous system.

“EL is a neurological syndrome caused by a virus but it produces a lot of psychiatric symptoms,” says Professor of History of Medicine at the University of Toronto, Edward Shorter.

EL caused patients to have symptoms of depression and anxiety and if it lasted for a long time could cause Parkinson’s-like symptoms of tremors and rigidity. The main symptom of EL was crushing fatigue which left patients bed-ridden, it also had a very high mortality rate of 20 per cent.

“COVID for example affects the respiratory organs - EL has the central nervous system of the brain and spinal cord as the target organ.”

The timing of the EL pandemic coincided with both WWI and the widespread sickness and death caused by Spanish flu.

Could this be more than a coincidence?

“It seems to have been viral but that’s not absolutely clear and why it appeared in that particular time is also unclear,” says Shorter.

“There are cities that knew EL that didn’t have flu in France for example.”

While there’s no certainty over the viral cause or connection to flu, it may be that there was some connection to the increased movement of people across continents linked to the conflict happening at the time.

It is true that there were cases all over the world from Europe to Japan, making it a truly global pandemic.

“1917 there was a lot of international travel because of the war and that unquestionably was a factor in propagating it,” says Shorter, although he points out there is no direct link between WWI and the psychological symptoms displayed by sufferers.

“There was a lot of psychiatry in the first world war to combat shellshock but this wasn't related to that at all in the civilian population.”

Despite lasting a decade the true causes of the encephalitis lethargica pandemic have never been ascertained, and no governments acted to stop the spread at the time, either.