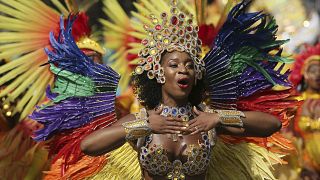 Europe’s biggest and best carnival is back. The Notting Hill Carnival is one of the most exciting weekends of the year for Londoners and many more beyond the capital. There’s music, dancing, costumes and everything else any carnival lover could possibly want.

It’s a welcome return to the carnival after two years’ postponement due to pandemic concerns.

While many carnivals across Europe come from religious tradition, Notting Hill Carnival has a different origin.

The first ever ‘Caribbean Carnival’ was held in St Pancras town hall in 1959. Although it didn’t take place in Notting Hill, even then the event was heavily linked to the Notting Hill community.

In the late fifties, racial tensions in London were running high. The previous decade had seen an influx of people from the West Indies answering the call from England to help its post-war reconstruction, and giving up their lives and homes in the Caribbean.

Although these people were coming from colonies of the British Empire, there was less than a warm welcome in the UK. The tension between the white British community and the West Indian community came to a head during the 1958 Notting Hill race riots.

After the scenes of violence had calmed down, the West Indies residents wanted a way to celebrate their culture and remind them of home.

One of the main people associated with starting the carnival was Claudia Jones, a Trinidad and Tobago-born journalist and activist who had been kicked out of the US because of her Communist party membership. She also founded Britain's first major black newspaper, the West Indian Gazette, in 1958.

Jones helped organise the carnival and had some of the proceeds from ticket sales be used to pay for the legal fees of people arrested in the previous year’s riots.

The carnival featured palm trees from Kew Gardens, a black beauty contest, music and dancing. It was even filmed by the BBC. The carnival took place in the hall for five years before moving to a street festival in 1964.

Since that first carnival in a town hall in 1959, the Notting Hill Carnival has grown to be one of the biggest events in London.

What to do at carnival?

Eat, drink and make merry! There's an incredible large range of foods to try and taste from all corners of the Afro-Caribbean diaspora as the carnival stretches across the whole long bank holiday weekend from 27-29 August.

The days all have a slightly different vibe with the Saturday considered the family day and the colourful parade of floats, while Sunday and Monday are the most outrageous and extravagant for parties.

For those attending, it’s recommended to download the official Notting Hill Carnival app which will provide maps, listings of performances, and recommendations for food and transport.

The main carnival parade will snake around the roads from Ladbroke Grove through Westbourne Park and will finish at Ladbroke Gardens.

The festival officially opens on the Saturday at 6am with the ‘J’Ouvert’ opening ceremony, which if you can drag yourself out of bed for, is not to be missed.

One of the best parts of Notting Hill Carnival are all the amazing costumes the paraders dress up in.

Mas costumes are the term for carnival costumes. Coming from the word ‘masquerade’, the origin of mas bands at the carnival is from a Caribbean tradition that stretches back to the 1800s when slaves would dress as their masters as a form of mockery.

Mas bands now collect to dress up according to different themes each year. Many of the costumes today owe to the Brazilian samba traditions as well.

Each year, there is a contest at the carnival for the mas band with the best costume and the winner will be announced on social media.

One of the biggest things on anyone’s to-do list this year is to check out the UK National Panorama Steelband Competition.

At the Emslie Horniman’s Pleasance Park on Saturday from 4pm-12am, the Panorama competition is the place to hear some of the best steel band musicians compete to see who has the best grooves.

While much of the Notting Hill Carnival is free to attend, you have to buy tickets beforehand to the Panorama competition. Proceeds are split between the artists though, so it’s a worthy investment.

If you want more music, check out the app to find a location of a soundsystem around the parade and get dancing.

For those brief moments you aren’t tapping your feet, there are also 300 different food stalls taking part. It’s a great chance to try some Caribbean delicacies, like jerk chicken, curried goat, ackee & saltfish, roti, and pepperpot.

Notting Hill Carnival is always a fun weekend, but it’s also a long weekend. Our last tip is to pace yourself, drink water, and get stuck in.

The Woman King: if you see one movie this year, please make it this