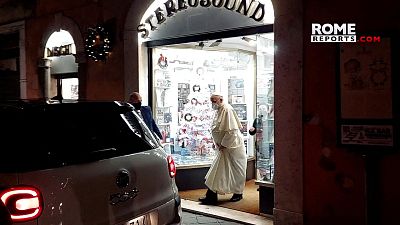 The catholic leader was spotted on a private visit to Rome's Stereosound record store   -   Copyright  Reuters
By Shannon McDonagh  with AFP  •  Updated: 13/01/2022

Pope Francis, a lover of classical music, slipped out of the Vatican on Tuesday evening to visit old friends who run a Rome record shop and came away with a new vinyl.

The 85-year-old sovereign pontiff made a private visit to Stereosound at around 7:00pm on Tuesday evening for around 10 minutes.

He stopped by to bless the recently renovated store he is said to have frequented before the beginning of his papacy in 2013, before being spotted by Javier Martinez-Brocal, a reporter for the Rome Reports television news agency, who posted the video to Twitter.

The video showed the pope – who shunned bulletproof cars in favour of a simple white Fiat 500 with Vatican number plates – exiting the store.

What music did The Pope purchase?

Francis left with a gift box containing a classical music LP, a gift from the owner's daughter, Tiziana Esposito, according to the Vatican.

"It was a quick, big, human, wonderful visit," says Esposito, as many curious people flocked to the shop.

"When he was bishop, archbishop then cardinal, he came to buy classical music records, for himself or for gifts. He is a great lover of music, opera, voice," she said.

Francis is known to like Beethoven, Mozart and Bach – he is also "a great fan of tango" from his native Argentina, she added, calling him "a simple and extraordinary person".

Store employee Danilo Genio says the visit may have served as a nostalgic reminder for a time when Francis was formerly known Cardinal Jorge Mario Bergoglio, archbishop of Buenos Aires.

"It was kind of a promise he made to us and wanted to honor. He came back to say hello, and maybe it was also a special moment for him, a nice memory of when he was not yet Pope," he said.

It was not the first time the pope has visited a Rome shop. In 2015, two years after his election, he ordered a new pair of glasses from a Rome optician.

They were to have been delivered to the Vatican but he decided to go pick them up himself.