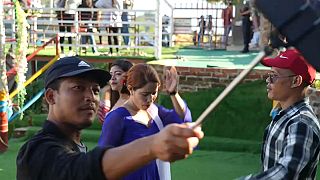 Some of Nepal’s sacred sites have started to ban TikTok as people have been flocking to locations to film themselves, upsetting some worshipers.

"I came to visit, but especially for TikTok," said a woman at one site in Kathmandu, the country’s capital.

Some sites have put up 'No TikTok' signs. Others have installed CCTV cameras and hired security guards to patrol the locations.

"It’s the ban of TikTok. It’s prohibited. We can use photos sometimes but not the TikTok,” said Binod Shrestha, a member of the Boudhanath Temple development committee.

"Crowds of people also use TikTok. They disturb the people walking and worshipping.”

TikTokers have also been accused of starting traffic jams in the tourism-dependent country and forcing some farmers in eastern Nepal to harvest their fields early after people trampled over their crops.

“They destroy everything. They trample my rice shoots,” says Jayaram Thapa, a farmer.

“What could I tell them? I tell them to stop, not to damage my fields, but they dance. They tell me that they are not doing anything wrong."

The popularity of TikTok has soared in Nepal over the past two years. One survey suggests that the percentage of people with internet access using the app rose from just three per cent to 55 per cent. The rise has been partially attributed to the COVID-19 pandemic.