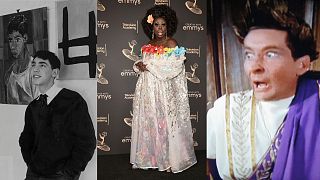 Over the summer Euronews Culture brought you a series on minority languages.

There are 79 minority languages recognised by The European Charter for Regional or Minority Languages. The charter covers many majority languages spoken in other countries, for example Hungarian speakers in Romania, as well as those spoken by fewer than one hundred people.

Some minority languages like Cornish and Basque are residues from a bygone era and are spoken by groups subsumed into larger nation states, but that’s not what we’re looking at today.

Polari is a secret language developed on the fringes of society. Although almost lost to history it has its fingerprints in queer culture, and the mainstream lexicon today.

Unlike the minority languages we’ve covered before Polari is a sociolect; a language spoken by a particular social group, not tied to an ethnicity or nationality.

“It was used by people on the outside; thieves, prostitutes, theatre people, queer people, that kind of fairground culture.”

With linguistic roots in the yiddish of Jews fleeing persecution in the Pale as well as Italian, Polari was a mongrel tongue recognisable only to those in the know.

During World War II the city of London became a playground for illicit activity amid blackouts and the general chaos of war. In this atmosphere secretive queer venues like the women-only Gateways Club opened up to cater to people taking advantage of the slipping of social norms during conflict.

By the 1950s Polari was spoken predominantly - although not exclusively - in a gay community facilitated by this period who used it as a way to both identify each other and disguise themselves.

“Homosexual acts were illegal, you were likely to be beaten up, attacked or arrested. Polari could be used to protect yourself and identify yourself to other queer people,” says Dolan.

“You’d drop a few words in and if they picked up on it you were away, if not they just stared back blankly.”

The existence of these clandestine spaces also provided the networks necessary for learning Polari, a process which couldn’t happen in childhood and through formal education as with ethnic or national languages.

“If you were a chicken [Polari for young gay man] and walked into a bar you wouldn’t know what they were saying,” says Dolan.

“It was passed down - that is the way people learned it and picked it up.”

In the 1960s the hidden-in-plain-sight nature of Polari reached new bare-faced heights with a BBC radio show called ‘Round the Horne’.

The show - which ran from 1965 until 1968 - was fronted by Kenneth Horne supported by Hugh Paddick and ‘Carry On’ actor Kenneth Williams. It was rich in innuendo and featured larger than life characters played by Williams and Paddick with Horne acting as a calm foil to the high jinx of the rest of the cast. The camp characters played by Williams and Paddick spoke in Polari.

“When Mr Horne walked in they would say, ‘bona to vada your dolly old eek,’ which means how nice to see your lovely face again,” says Dolan.

A regular motif was Williams and Paddick opening a new business venture with Horne coming to visit. In one such episode the pair open a law firm which Horne visits to request their assistance, only to be told they already have “a criminal practice that takes up most of our time”.  A thinly veiled reference to homosexuality.

In another in which Paddick and Williams open a restaurant. double-entendres are made about dirty dishes, with ‘dish’ being the Polari word for ‘bottom’.

“This was at a time when people would sit around the radio listening with their families,” says Dolan.

“It was really funny and camp and silly. They were blatantly gay characters.

“Polari operates on a series of levels, you have to be in on the joke to get it, if you don’t know you don’t know. Some people will see it as funny and silly and some people would get a different level of meaning.”

The popularity of ‘Round the Horne’ and the ubiquity of radio meant that even the most naive listener began to pick up on the messaging. Meanwhile progressive movements for gay rights found little use for the coded language of Polari, either eschewing it in favour of being loud and proud or seeking to prove parity with straight society through forms of assimilation. As a result of this, the language in its original context has fallen into disuse.

That isn’t the end of the story though and today words once uttered by gay men in backstreets have made their way all over the world, even to the lips of Britain's Royal family.

In 1982 when Princess Anne was photographed falling from a horse, she famously told paparazzi to ‘naff off,’ perhaps not realising she was using a Polari reference for heterosexual men. ‘Naff’ is an acronym meaning ‘Not Available For F**king’.

Polari has even found a place in the British Houses of Parliament, in the form of an artwork by Dolan. The artist translated part of the Wolfenden Report - a famous paper that first recommended the decriminalisation of homosexuality in 1957 - into Polari on request of the government.

“It was for a project called ‘Festival of Freedoms’,” says the artist.

“They originally wanted me to translate the 1967 sexual offences act but in Polari there’s nine words for wig and no words for government legislation.”

Commonly used words like ‘troll’ (meaning someone unpleasant or unattractive) were popularised by Polari, meanwhile ‘trade’ a word used on the reality show ‘Rupaul's Drag Race’ denotes someone attractive. ‘Drag’ itself and the yiddish word ‘zhooshed’ also strike the chime of recognition for most people.

“You can walk into a wardrobe department in any theatre and they’ll know what zhooshed means,” says Dolan.

Polari finds sister version of coded queer language in Greece, Spain, the Phillippines and South Africa, but if you were to ask Dolan for his favourite word in his mother tongue (as it were) the answer would be fericadooza.

“It means a big fight or brawl.” he says.