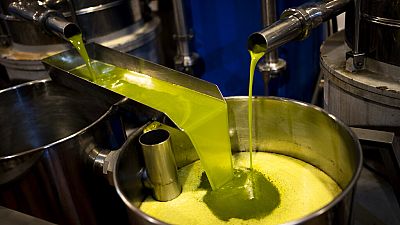 The olive tree is a symbol of the Mediterranean. Plato was said to have dispensed his wisdom under an olive tree, and its widespread cultivation in Spain goes back to the Romans.

Spain, the world's leading olive producer, has seen its harvest fall victim to the global weather shifts fueled by climate change. Industry experts and authorities predict that the harvest of the tiny fruit will fall by more than 50 per cent compared to last year, due to this year’s summer drought.

It's a situation which has put olive farmers' businesses in jeopardy, as Spain represents 75 per cent of the world’s olive production. That’s nearly 10 million tons of olives every year.

This year has been the third driest in Spain since records began in 1964. That, combined with the hottest summer on record, has made matters much more difficult for the country's 350,000 olive farmers.

In May, high temperatures in the blossoming season destroyed many olive trees, and the few surviving fruits have grown small and thin because of the lack of water.

A little less water can actually produce better oil, but this drop in moisture has proven too much for the trees to take.

Farmer Juan Antonio Delgado walks past his trees in the southeast town of Quesada, a rural community in Spain's olive country, and is concerned.

"I have never known a year like this. They say that there have been years of drought before, but it has always rained a little more," he says.

October is when farmers like Delgado pick their olives, shortly ahead of their full ripeness, in order to produce that golden elixir which only requires a bit of bread to make mouths water.

But Delgado left most of the olives on his trees, banking on rainfall that could make juicier olives ready for pricking in a few weeks. So far, no luck.

"My mission is to put up with it as long as I can, when I can't anymore, so that all expenses are more than the production, because we'll have to go on strike," he says.

"When I don't take out enough to live, what do I do? If I live from the tree, the tree cannot live from me! It's clear now. Then we will try to hold out as long as they give us the aid, but the time will come when the aid does not cover it."

Delgado is only collecting half the olives he did compared to this time last year, which is in line with the national average.

On average, Spain grows more than three times the amount of olives than Italy and Greece - two countries which have also been hit hard by extreme weather.

Olive oil production in the European Union is forecast to fall by over 35 per cent compared to last year, according to the Copa and Cogeca farmers organizations. The groups stated that Spain is a "particularly worrying" case.

The smaller harvest is driving up prices, according to Italian olive oil producer Filippo Berio. Indeed, the price of European extra virgin olives has soared from €500 to €4,985 per tonne.

The problem that affects Spain's olive groves is clear for agricultural engineer Antonio Bernal. During his visits to the groves in Quesada, Bernal saw the return of long-forgotten diseases in the trees. He believes that milder winters help fungi proliferate.

"The solution is to stop climate change,' says Bernal. "Olive groves cannot adapt at a pace to assume such a fast (climate) change."

Is overpopulation fuelling climate change? It’s not that simple

How much has climate change cost the EU in the last 40 years?