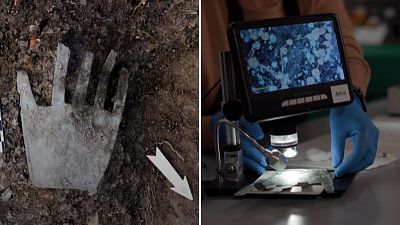 An incredible discovery has been made in the Spanish region of Navarre.

A bronze hand-shaped sheet was found in the ruins of a castle in Irulegui, south-east of Pamplona (capital of Navarre) in June 2021 - the find has only just been announced with the intervention of the regional president of Navarre, Maria Chivite.

The extraordinary artefact, which has been named the 'Hand of Irulegi', is inscribed with the oldest text in ancient Basque known to date and is believed to be more than 2000-years old (originating from the Vascon people from the 1st century BC.)

"This hand and the text written on it is the first direct testimony we have received from the Vascon people," explains Chivite.

"It is the first and so far the only time that we have had the opportunity to hear their voice directly," she added.

It is believed that the hand may have been hung from a door, in order to provide protection for the house.

What is written on the Hand of Irulegi?

Five words are inscribed on the artefact in "vascon", the language spoken by the inhabitants of the Navarre region at that time.

The first word reads "sorioneku", which echos the word "zorioneko" in present-day Basque-language, a word that means "good fortune."

"Sorioneku" is accompanied by four other words whose meaning is not as apparent.

Chivite describes the discovery as a "historical milestone", both archaeologically and linguistically, as "until now we thought that these settlers did not write, but now we know that they did".

Check out the video above to see the moment the artefact was unearthed from the ground.