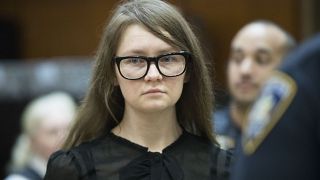 The viewing public’s macabre appetite for true crime is well established and happily catered for by more than willing podcasters, broadcasters and streaming giants.

‘The Tinder Swindler,’ a tale of romance fraud on a grand scale, was Netflix’s most-watched series in February this year. Meanwhile, ‘Inventing Anna’ - the hit show about a duplicitous socialite which had its first iterations as a podcast and frontpage magazine feature - ranks in Netflix’s top 10 most-watched series ever.

The famous fraudsters have replaced tales of untimely demise such as ‘Murder to Mercy: The Cyntoia Brown Story,’ ‘Sophie: A Murder in West Cork,’ and ‘Why Did You Kill Me?’ all of which spent more than five weeks in Netflix’s top 10.

With a canny knack for knowing when it's onto a winner, Netflix now provides a plethora of options for fraud lovers. ‘Trust No One: The Hunt for the Crypto King’ covers fraud in the digital currency market, ‘Bad Vegan’ tells the story of a fraudulent vegan restaurant owner and victim of coercive control, and forerunner to all of the above ‘Fyre Festival’ famously told the tale of a disorganised and misleading music festival.

Does this trend for fraud show a softer side to true crime?

“It’s less of an uncomfortable watch. It offers more escapism,” says Vicky Baker, maker of ‘Fake Heiress’ the podcast which walked so ‘Inventing Anna’ could run.

“I think this trend is a progression from all murder-related podcasts and documentaries that became particularly big a few years back. These often involved female victims, death penalties, and miscarriages of justice, so they were a grim watch.

“In fraud cases, there is usually no violence, and we often presume the con artist knew what they were doing.”

In the Oscar-nominated ‘Nightmare Alley’, Bradley Cooper plays a con artist in the early 20th century US. The film begins with Cooper as a drifter, pitching up at a carnival as an unknown, with much the same ending.

A common 20th-century trope of the conperson is a snake oil salesman travelling from town to town to engage in confidence trickery, with no one able to check his backstory. But in an era of social media, and near-total state surveillance no one need be concerned about this right? Wrong.

Baker’s latest podcast, ‘Fake Psychic’ explores the ways in which conman Lamar Keene tricked people into believing he was a medium, even resorting to petty theft to glean information about his victims. Keene would certainly have relished using social media to gather intel, but apart from this fraudsters can use platforms to curate a convincing presence for their fake identity.

“Modern fraudsters…they have to be careful of their digital footprint,” says Baker.

“People are presenting mythical versions of themselves everywhere on social media.

“Anna Sorokin became Anna Delvey with the help of a self-curated Instagram page.”

It can feel as though social media amplifies existing anxieties about duplicity in the people we know, with even influencers themselves sometimes blowing the lid on their fake online personas.

In 2016 influencer Essena O’Neill changed the name of her Instagram account to “Social Media is Not Real Life” as she deleted 2,000 photos and recaptioned others describing the craft of creating a fake impression for her followers.

“I think a lot of people recognised the parallels to the falseness of certain influencers. There are so many small-scale Annas - male and female - talking the talk and creating illusions,” says Baker.

“The world can be a very scary place,” adds Thomas Plante, Professor of Psychology at Santa Clara University.

“People…want to understand these criminals too so that they can further protect themselves and those they care about.”

Getting inside the fraudster

Baker is right to say that fraud cases offer less physical violence to viewers, but they also offer glamour.

Reality TV (a genre which itself invites contemplation on the line between real and fake) offers an insight into the lives of the rich and famous. ‘Selling Sunset,’ tours viewers around the multi-million dollar homes of Los Angeles, while the Real Housewives franchise (itself home to high-profile fraud cases in the shape of Jen Shah and Erika Jayne) has shown us the upper crust scenes of cities from Dubai to Atlanta.

A post shared by What to Watch on Netflix (@whattowatchonnetflix)

Then there is the question of the victims. White-collar crime is often considered ‘victimless,’ with the defrauded remaining nameless or merely numbers of a spreadsheet. Wealthy victims like those Delvey conned can be seen as deserving, or at least not likely to miss the cash. Fraud victims can also offer the audience a sense of smug satisfaction, as they assume that they would never be so stupid as to fall for a con.

“Whenever I have spoken to fraud experts and psychologists, they emphasise that people who get scammed are not idiots. It is emotional manipulation and we can be more susceptible to this than we think,” says Baker, noting that the victims in ‘Fake Psychic’ were often struggling with grief.

“A lot of those victims were not rich, and they were not stupid.”

The podcast ‘Scam Goddess’ bills itself as ‘true crime only without all the death,’ with host Laci Mosley taking an almost reverential approach to scammers, getting inside what they did and what motivates them.

“Most people fear them,” says Plante.

“They may want to get insights into their behaviour and motives to better protect themselves and those they love.”

“The psychology behind the scams is fascinating,” adds Baker.

“With Anna, she was motivated more by power than money. With Lamar Keene, he liked acquiring wealth but he was also very ambitious and he kept setting himself new goals.

“It’s fascinating to try to unpick these minds.”