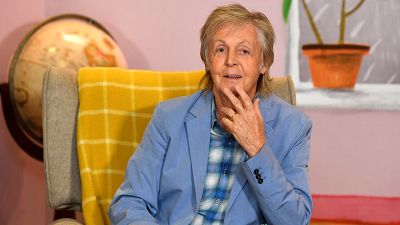 The Beatles musician says he'd rather chat to fans than sign pieces of paper   -   Copyright  TOBY MELVILLE/REUTERS
By Shannon McDonagh  with Reuters  •  Updated: 26/10/2021

After six decades in the music industry, Sir Paul McCartney has announced he will no longer sign autographs for fans.

The Beatles legend doesn't see the point in fans having his signature because "we both know who I am".

"It always struck me as a bit strange - 'here, can I write your name down on the back of this till receipt please?' Why?"

The icon also doesn't understand why anyone would want a poor-quality selfie over a good conversation.

He added: "What you've usually got is a ropey photo with a poor backdrop and me looking a bit miserable. Let's chat, let's exchange stories."

Back in 2008, Macca's bandmate Sir Ringo Starr announced he would not be signing any more autographs or accepting fan mail.

The drummer had built a reputation for signing and sending memorabilia to devotees around the world.

"I'm warning you, with peace and love, I have too much to do."

He later explained he felt much of the signed pieces were sold on for profit and not intended for actual fans of himself or the band. Regardless, it was met with disdain and one US news outlet offered to take the mail on his behalf.

Conversations have long brewed about the blurring boundaries between public figures and their followers in an age of digital connectivity. Fans are often be treated like and referred to as "friends".

Some stars have seen it as an opportunity to be honest about where the line sits - earlier this month actor and comedian Jonah Hill posted to Instagram asking people to refrain from commenting on changes in his weight, good or bad.

The former Beatles are also not the first to step back from autograph signing and picture taking.

J****ustin Bieber took to social media in 2016 to tell his Instagram audience - 201 million people in today's numbers - that he would no longer pose for fan pictures as it made him feel like a "zoo animal".

In 2018, Breaking Bad actor Bryan Cranston told his Twitter followers that autographs were off-limits after they left him feeling "overwhelmed".

Friends,
After 18 years of signing everything for fans - I’m retiring. Overwhelmed by requests and I just can’t do it anymore.
I love meeting fans and will personalize pix in person, but that’s all. Thanks for your understanding. See you on the street - we’ll take a selfie! Bryan

Was McCartney responsible for the Beatles' break-up?

Meanwhile, McCartney recently denied he was the band member who "instigated" the iconic Liverpool group's split in 1970 and insisted it was the late John Lennon - who was tragically murdered aged 40 in 1980 - who was behind their decision to call it a day.

Speaking on BBC Radio 4's new series This Cultural Life he said: “I didn’t instigate the split. That was our Johnny.

On the speculation that was rife at the time that their demise was his doing, the music legend insisted: “I had to live with that because that was what people saw. All I could do is say, ‘no’.”

“I am not the person who instigated the split. John walked into a room one day and said I am leaving the Beatles. Is that instigating the split, or not?”

Lennon had told the rest of the band that he wanted to leave the group.

And McCartney suggested the other members - also including George Harrison, who died aged 58 in 2001 - had all reached the same point in their lives when it was time to move on, even if they didn't realise it at the time.