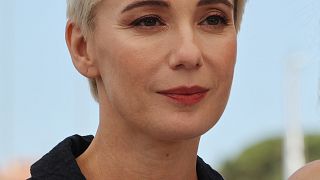 Khamatova is a celebrated actress in Russian cinema but didn't return form her vacation after speaking ut against the invasion of Ukraine   -   Copyright  Valery Hache/AFP
By Tim Gallagher  with AFP  •  Updated: 22/03/2022

A famous Russian actress has fled the country and denounced Vladimir Putin’s invasion of Ukraine.

Chulpan Khamatova, known for her roles in ‘Goodbye Lenin!’ and ‘Petrov Fever’ announced that she had left her country for Latvia, on 20 March.

In an interview with Russian journalist Katerina Gordeeva, broadcast on YouTube, the 46-year-old said that she had been in the Latvian capital of Riga for several weeks.

"We are currently in Latvia,” the star said.

“I cannot say that the pain of other people, the tragedy that other people are going through, the humanitarian disaster, has anything to do with a liberation,“ said Khamatova, who was on holiday when the war began.

"At first I thought we had to wait, then I signed a petition against the war, then I was made to understand that 'It would be better not to go back to Russia,' she continued.

‘I cannot ignore what I see with my own eyes’

In her interview, Khamatova said she had two options if she wished to return to Russia without going to prison; stop calling the illegal invasion a war or beg forgiveness for not having supported the military operation.

"I am not able to ignore what I see with my own eyes,” the actress said

“I know that I am not a traitor, I deeply love my country.”

Khamatova made her film debut in 1998 after training at the Kazan Theatre School and then at the Russian Academy of Theatre Arts in Moscow. She became famous in Bakhtiar Khoudojnazarov's ‘Luna Papa’ (1999), which earned her the prize for best actress at the Russian Film Festival in Honfleur.

Considered one of the best Russian actresses of her generation, she split between cinema, theatre and television.

Khamatova is just the latest cultural figure to leave Russia. In mid-March, a Bolshoi star ballerina, Olga Smirnova, announced that she would slam the door of the prestigious Russian troupe after denouncing the war in Ukraine.

Others have been forced out of public life due to their support of Putin such as conductor Valery Gergiev and opera singer Anna Netrebko.

Russia invaded Ukraine on February 24 and is waging war across the country by shelling major cities. So far an estimated one-quarter of the Ukrainian population has been displaced according to the UN with civilian deaths impossible to accurately estimate until after the war is over.