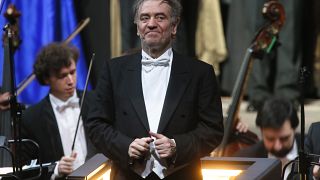 Valery Gergiev, a close ally of Putin, has been dropped from US tour dates and reprimanded by the Mayor of Milan   -  Copyright  Dmitry Lovetsky/AP
By Tim Gallagher  with AP  •  Updated: 25/02/2022

A Russian conductor who is close to Vladimir Putin has been blocked from conducting the Vienna Philharmonic on its tour of the US.

Valery Gergiev, who has often spoken in support of the Russian leader, was dropped from the five date tour on 24 February after Russia’s invasion of Ukraine.

"This change was made due to recent world events," says Carnegie Hall spokeswoman Synneve Carlino.

The tour is due to start at Carnegie Hall on Friday night.

Gergiev, 68, is music director of the Mariinsky Theatre in St. Petersburg, Russia and chief conductor of the Munich Philharmonic. He received a Hero of Labour of the Russian Federation prize that Putin revived in 2013 and has often voiced support of Putin, who has been widely condemned for ordering an invasion of Ukraine that began Thursday. Ron Boling, a spokesman for the orchestra, said the Philharmonic would not comment when asked whether the decision was made by the orchestra, Gergiev or Carnegie.

Online posts in recent days had promised protests at Carnegie Hall, where Gergiev was to lead the Vienna Philharmonic on Friday and Saturday nights, and Sunday afternoon.

The orchestra then travels to Hayes Hall in Naples, Florida, for performances on Tuesday and Wednesday.

Metropolitan Opera music director Yannick Nézet-Séguin will replace Gergiev for the Carnegie concerts. A Russian pianist who supports the annexation of Crimea in 2014, Denis Matsuev, has also cancelled his performance on 25 February.

The move to remove Gergiev from the US tour follows a controversy in Italy.

Previously, Milan's famed La Scala sent a letter to the conductor asking him to make a clear statement in favour of a peaceful resolution in Ukraine, threatening that otherwise he would not be permitted to return to complete his engagement conducting Tchaikovsky's "The Queen of Spades."

Gergiev was lightly contested by the audience during a performance on 23 February, but the situation changed dramatically with the Russian invasion overnight, a theatre spokesman said.

Gergiev is next scheduled to appear in Milan on 5 March.

Milan Mayor Giuseppe Sala, who is La Scala's president, said the request was made because Gergiev had declared his closeness to Russian President Vladimir Putin on multiple occasions.

"We are asking him to take a clear position against this invasion, and in the case in which he doesn't do it, we are constrained to renounce the collaboration,'' Sala said. "It is clear that the culture can go on other levels, but in front of such a situation we need to act."