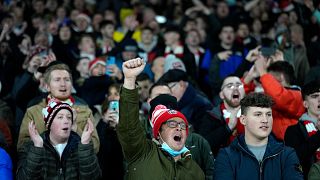 Things Can Only Get Better: a pop anthem that underpinned New Labour’s rise to UK election success in 1997. Fast forward a couple of decades and it’s now a terrace anthem sung by the beleaguered fans of a staunchly Labour town.

No longer a motivational ditty, it’s a euphemism for the sorry state of Sunderland AFC’s fortunes.

Now, after two series' of the documentary 'Sunderland Til I Die', the Netflix buzz has died down, and Sunderland no longer appear to be the casual observer’s favourite club. Or perhaps, after four long seasons rooted in English football’s third tier, everyone has lost interest. Things actually appear to be getting worse.

“Those chants annoyed me when they first came about,” says Martyn McFadden, chief of Sunderland’s leading fanzine, A Love Supreme. “It was like the fans were accepting our club’s uselessness. But it’s gallows humour, really. Everyone’s pissed off so you make a joke and just get on with it. It’s human nature.”

A friend at a record label was watching at home and he heard it on the TV. He phoned me up and said ‘do you want a record deal?’

McFadden has followed the club through thick and thin. And he knows more than a thing or two about how chants come about, and why some will root themselves among a crowd more than others. Most, he acknowledges, come about on a drunken journey to an away game. Tucked up on the north-east coast, barely an hour from the Scottish border, most of Sunderland’s trips on the road are long enough to write an entire songbook.

Those chants will usually stick around as long as the player they celebrate, which given how inventively Sunderland fans crowbarred the name of goalkeeper Costel Pantilimon into the melody of 4 Non Blondes’ 'What’s Up', seems a crying shame.

Pantilimon himself – never a player who’d attracted a dedicated song on the terraces before his move to Wearside – was joyfully aghast in the post-match interview following the chant’s debut in the away end at Tottenham Hotspur.

But others stood the test of time in an unexpected way. Martyn and his ALS team saw two of Sunderland’s most iconic chants of the 1990s top the UK’s independent music charts as singles.

The first, in 1996, was Cheer Up Peter Reid. Derived from The Monkees’ 'Daydream Believer', it had started organically on a beer-addled trip to an away fixture and morphed into a charity pop song when Martyn and his mates wrote some verses to go with the choruses.

“That chant could have just come and gone, but we went on a mad run of winning nine games in a row and it could be heard when Sunderland games were on the telly,” says Martyn.

The second came with the arrival of Niall Quinn, a player who established himself as a true Sunderland hero, even taking over as chairman in 2006.

At his former club, a group of Manchester City fans concocted the mischievous 'Niall Quinn’s Disco Pants' after seeing the striker dancing badly in an upscale Italian nightclub during a pre-season tour wearing a vest, cut-off jeans and flip-flops.

“Pick ten Man City fans from the time and I bet nine of them would never have heard of it,” admits Martyn. “It was described as a periphery chant. But as Quinn’s form picked up in the 1998/99 season, my mate Ian quite liked the idea of getting it going among Sunderland fans.

“We played Crewe Alexandra away on a midweek evening – our fanzine only ran one bus that night, and we thought ‘if we get them singing it, that’s 50 people’. I think we might have even printed out the lyrics for them. Releasing a single wasn’t in our mind at this point – we just wanted to get people singing it. Ian was one of those people who’d go to the match and start a chant.

“All the people on the bus sang the chant throughout the second half of the game – and others started joining in. We were winning, which helped. I remember we got a corner and Quinn was on the near post and he heard it and he looked over at us, baffled.

“A home game followed and it was live on Sky Sports; Quinn scored and the whole north stand started singing the song. A friend at a record label was watching at home and he heard it on the TV. He phoned me up and said ‘do you want a record deal?’”

“Sunderland went on a really good run and we released it with just five games to go when promotion to the Premier League looked nailed on. We sold it locally though all the record stores and our fanzine sellers outside the matches. It started as the story of us trying to get the chant going, but it became a music release that got to number 59 and which now lives in the Guinness book of hit singles. Looking back it was a bit of a cultural moment.”

The chant certainly fed Quinn’s icon status in the city. It’s perhaps this philosophy that helped inspire Sunderland’s haphazard signing of Will Grigg, who came with Will Grigg's On Fire – sung to the tune of Gala’s Freed from Desire, a viral moment of Northern Ireland’s Euro 2016 campaign – as a ready-made chant. When his goalscoring ability faltered, the fans adopted it ironically.

In the age of social media, though, chants follow players from club to club with ease, even jumping countries and language barriers. The world of viral clips provides a shortcut to fame – or infamy. Chelsea fans ruthlessly singing club owner Roman Abramovic’s name as the UK government sanctions him – and by default, the club – sit on the sorrier side of the coin; on the cheerier side – and a true tonic on days football fans haven’t painted themselves in glory – is Hibernian fans belting out The Proclaimers’ 'Sunshine On Leith' in full following their club’s victory in the 2016 Scottish Cup Final.

It’s a snapshot of an average club tasting glory and shamelessly hitting the high notes of a melancholy pop song in celebration. And for anyone stuck supporting a team rooted in a league it feels too big for, it’s delightful proof that things really can get better.