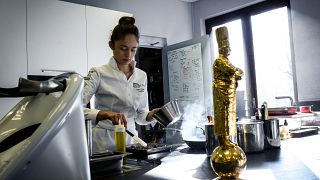 The Bocuse d'Or is about to kick off its European leg in Budapest as chef teams from 18 countries put their culinary wits against each other for a place in the 2023 final.

And this year, a special honour has befallen 24-year-old Naïs Pirollet.

Breaking a male tradition, she will become the first woman to represent France at the Bocuse d'Or Europe competition.

Ten places in the grand final will be decided in Hungary on March 23rd and 24th.

She will lead the team alongside her sous Chef Arthur Debray, and her commis Cole Millard.

In September 2021, she seconded the French Chef Davy Tissot who was eventually victorious after a strong showing from the Nordic nations. In November that same year, she won the French selection and became the first woman to head the symbolic red, white, and blue team since the creation of the competition in 1987.

Debray has been here before, too. He was the commis back in September 2021 when the French team were victorious under Davy Tissot.

"I have no words to describe how I feel," he told Euronews just seconds after the victory, "But I want to thank all the chefs that have helped me and given me advice along the way."

During a long and arduous preparation period, she and her team are currently focusing on venison, one of the ingredients on this year’s menu.

"At the moment, we are trying to break everything down and understand the pieces, see the textures, the cooking reactions and decide what we like best and what we want to put forward for the competition, and we try to work a lot with designers who also give us guidelines and a spirit of composition."

The rising star graduated top of her class in 2017 from the Paul Bocuse Institute, one of the world’s most famous culinary schools.

While she has never led a kitchen, Pirollet is no stranger to the pressures of competitive cuisine.

Pirollet hopes to make history, like Paul Bocuse, the founder of the competition and late embodiment of French gastronomy.

In the race of a lifetime, they will have just over five and a half hours to prepare two dishes, facing off against 17 other European nations, all led by men, for one of 10 places in the Grand final in Lyon in January 2023.

Bocuse d'Or: behind the scenes at Lyon's gastronomic olympics