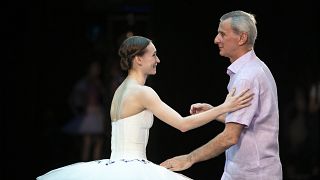 One of Russia's Bolshoi Ballet's star ballerinas, Olga Smirnova, has left the prestigious troupe to join the Dutch National Ballet in Amsterdam, becoming the first Russian dancer to officially take refuge in another company since the invasion of Ukraine.

"Smirnova has been very clear in her recent denunciation of the Russian invasion of Ukraine, which makes her work in her native country untenable," the Dutch National Ballet said in a statement Wednesday.

The prima ballerina used her inaugural Telegram post to expound upon her decision.

"The point is not even that probably every second Russian has relatives or friends living in Ukraine, not that my grandfather is Ukrainian, and I am a quarter Ukrainian, but that we continue to live in the 20th century, although nominally in XXI."

"I never thought that I would be ashamed of Russia," the post continued.

"I have always been proud of the talented Russian people, our cultural and sporting achievements. But now the line is drawn on the before and after. And it hurts that people are dying, while others are deprived of a roof over their heads or forced to leave their homes."

"Smirnova chose to settle in the Netherlands because a collaboration with Dutch National Ballet has long been on her wish list."

Her first appearance with her new company will be in the ballet classic Raymonda, which premieres on 3 April.