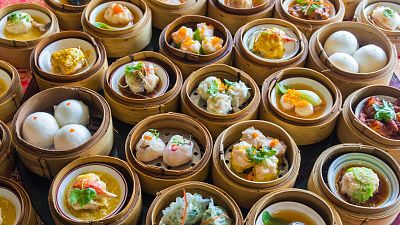 It’s Chinese New Year, which means you’ll likely see a pop of celebratory colour against Paris’ grey mid-winter sky this week, as red Chinese lanterns line many of the city’s pathways and passages.

Lasting up to sixteen days, this year honours the water tiger and a period of festivities, family and food has begun.

During this time, people from all pockets of the city’s Chinese neighbourhoods share the opportunity of a communal celebration, tucking in to sweet and savoury dishes that balance the creative and the traditional.

Where is the best place in Paris to find Chinese food?

The city of Paris has a thriving Chinese community, and good eats are a staple at this time of year.

Developed in the 1970s and located in the city’s 13th arrondissement, the ‘Quartier Asiatique’ is the largest culture and commercial area for the city’s Asian community.

Slightly north-east, is the buzz of Belleville in the city’s 20th arrondissement. The city’s second Chinatown, it experienced a boom in the 1980s and is famous for its cheap and cheerful restaurants.

By 11pm, there’s often still people queuing outside, searching for a bowl of soupe de raviollis. The take-out service seems to be non-stop, with orders of crispy duck and egg fried rice being hastily prepared.

The take-out service seems to be non-stop, with orders of crispy duck and egg fried rice being hastily prepared.

A little to the north-west is the city’s oldest Asian neighbourhood, located in the 3rd arrondissement. Spanning only a few streets, it’s the smallest neighbourhood, but boasts a host of decently priced and popular eateries that are quick and convenient.

All three neighbourhoods serve the city with an array of options.

Paris is known for its restaurant-come-delicatessen Chinese eateries, known as traiteurs chinois; a sort of no-fuss cafeteria where customers can mix and match whatever Chinese food they fancy from a glass cabinet filled with savoury goodies.

Usually there’s nems (spring rolls), raviolis, and brochettes (to name but a few items), with a whole meal likely to cost less than any other variation of cuisine within the city.

The makings of a homesick community

From Antwerp to Athens, the Chinese food we’ve come to know has won the affections of a European palette.

But does this offer only a sanitised version of Chinese culture and cuisine?

Henrike Theda Klug is the co-founder of Paris-based Chinoiseries, a food service designed to share the craft of Chinese food and culture through unique dumpling-making classes, home-cooking, and their perpetually sold-out Supper Clubs.

Her and her business partner, half-Chinese, half-British Charlotte Moseley, bring experiences into Parisian homes that they “probably wouldn’t have access to unless they actually had dinner with a Chinese family”.

“I think as more and more people emigrate from different regions in China, you’ll see different styles of Chinese cuisine – which homesick Chinese are making for themselves and others in their boat – and others who are trying to cater more to the European palate,” says Klug.

”Though there are some restaurants in Paris that are starting to offer Chinese food that’s a lot closer to what people in China actually eat than what you find in the traiteurs and all-you-can-eat restaurants, they are restaurants, businesses, who need to be profitable, so the fat/salt/sugar/fried food quotient will always be higher.”

The idea was “born during the pandemic out of our homesickness for China and sadness about widespread COVID-exacerbated anti-Asian sentiment.”

“Certain foods, such as bao and dumplings and noodles, and the 'street food' style of cooking are exploding in popularity” says Klug.

After having both separately lived in mainland China before moving to the UK as teenagers, the pair coincidentally wound up in Paris to pursue jobs in gastronomy. After meeting, they realised how much they had in common.

Tucking in to tender chicken and salty soups

In recent years, a boom of young chefs and seasoned foodies within Europe have begun to change the scene.

The customary sharing of food within Chinese culture inspired the Chinoiseries supper club in Paris, where people come and enjoy the authenticity of the pair's cooking.

As word spreads around the city, tickets to these evenings are increasingly hard to come by – especially at this time of year.

“[We wanted] to show how simple, nourishing, tasty and wholesome Chinese home cooking really is, compared with all of the bad rap it gets the world over for being greasy and cheap”.

“We serve a seasonally-informed mixture of cold and hot, vegetarian and omnivorous dishes with plenty of rice on the side before sharing the recipes online,” says Charlotte.

For Chinese New Year, the pair hosted a Cantonese style New Year’s Banquet, serving up recipes that can rarely be found within traditional Chinese restaurants on the European continent.

There are some restaurants in Paris that are starting to offer Chinese food that’s a lot closer to what people in China actually eat.

From seafood soup to homemade Char siu pork, they shared a treat for the senses, also offering organic wine pairings.

Braised chicken with shiitake mushrooms was also on offer, as well as Honk-Kong style steamed fish.

“We strive to use our platform to share some of our culture and traditions in the hopes of bringing everyone a little closer together,” says Henrike.

The use of social media has also enabled the word to be spread further afield.

Perfectly arranged dishes of unfamiliar flavours are a common sight on Instagram, such as homemade dumplings available in a variety of sorts, from pork, prawn and shiitake to five-spice beef. Available in a box of twelve, customers are then able to reserve them online for collection.

“Underlying all of this” they say, “we hope, through both the food we personally prepare as well as our recipes that we publish, to make Chinese cooking more accessible."