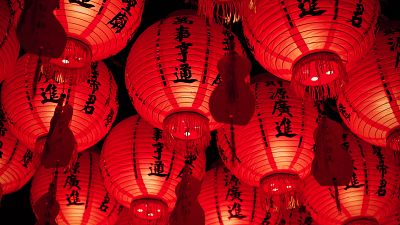 Last year’s record breaker saw 3 million trips made by people around the world, who travelled to spend the festival with family and friends. Others make the most of this time by spending it in some of Asia’s best holiday spots.

Europe has a vast Chinese community of 2.3 million people, with its most populous epicentre in Paris. This community, and the many others celebrating the Year of the Ox in 2021, have been left with no choice but to stay at home, instead of taking part in chunyun or attending their own local fireworks and festivals.

It’s not all bad news though - here are some ways you can get creative while celebrating at home.

Make (or order) some delicious food

As symbolism plays such a huge role in Chinese culture, foods brings lots of positive meanings for Chinese families at this time of year.

Dumplings and spring rolls are a favourite appetiser, and it’s believed that eating the savoury treats have financial benefits. One popular type of dumpling is called ‘the money bag’ because of its shape, and the tradition that eating dumplings is meant to bring prosperity and good luck for the upcoming year.

Fillings are versatile if you’re cooking from home, but your nearest restaurant will probably deliver if this isn’t an option.

For more simple, but equally as tasty dinners, you can dig in to long noodles for lasting life, accompanied by chicken or fish which are extremely popular at this time of year because of their connections with prosperity.

Early February is the time many Chinese households clear their homes of things that have been accumulated throughout the year before.

According to this custom, opening up your space for the New Year with a declutter is the best way to invite new energy inwards. Conclude this with a lot of dusting and sweeping - it’s mundane, but the idea is you’ll feel much better for it.

But - as we discover later on - steer clear of this on New Year’s Day. Domestic work of any kind is forbidden, so put your feet up and bask in the results of your tidy new home.

Decorate your home with as much colour as possible

Recreating the gorgeous scenes of your city is a lot easier than you think - and might be an especially appealing pastime following a year of being predominantly indoors.

Emulating the customary reds and golds can be pulled off through paper lantern making, hanging silk banners, or fashioning your own decorative fortune cookies. The internet is full of creative ideas for this, and tips around how to find materials that cost very little, but look incredibly effective.

Many people will also be missing the firework shows that take place from city to city worldwide. You could always do this on a smaller scale by sourcing sparklers online to get in the spirit of the celebrations wherever you are.

If you’re looking for some luck, don’t wash your hair or laundry on New Year’s Day - it’s said to wipe away your future fortunes.

You can also rule out doing any sweeping or hoovering, as it cleans away any chances of wealth that year.

Red is the colour at the forefront of all celebrations, even beyond decorations. Send the loved ones that you’d normally celebrate with a small amount of money in a red paper envelope.

In China, it’s common to give anywhere between 10-50 CNY, which equates to around 6 euros in coins. It’s not a lot of money, but it’s the sentiment of gratitude that counts.

If you’re more a gift person, that’s fine too. Wrap a small trinket in crêpe paper and tie with a gold string for a beautiful finish.

Tangerines and oranges are commonly used for decorative purposes at this time of year, as well as for desserts and gifting.

It’s not uncommon for small orange trees to be kept year-round for this reason., Consider purchasing one to brighten up your work from home space. A tangible reward for taking care of it properly might just save it from the fate of any other plant endeavours (we all developed the lockdown green fingers for a couple of weeks, didn’t we).

Not into fruit? Now is the time to indulge in other treats instead. Buy a bag of your favourite sweets or chocolates and enjoy.

7 incredible European cities you can easily reach by train