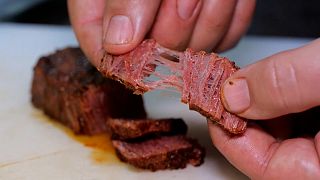 As the race quickens to provide diners with the best meat alternatives, one start-up is producing so-called 'whole cuts' of plant-based meat using 3D printers.

A five-course lunch at London's Chotto Matte was organised for a large-scale tasting, where 50 chefs, restaurant owners and food critics were invited.

Most were positively surprised by the quality of the product, titled 'New Meat'.

A sustainable approach to meat consumption

After all, it is composed of real muscle and fat cells, taken from animal cells and woven together.

"When you're slicing it, there's a hell of a lot of similarities. When you're cooking it on the barbecue, you can tell that it is a bit different because it cooks very fast and it sears quite quickly. Whereas different cuts of raw meat have different cuts, you know you have the fillet or the shin or the shoulder that slow cooks.

"So it looks kind of like a slow-cooked 'beef'. But then when you sear, it becomes like pink and seared, like how a 'beef' fillet would."

"We're offering an easy switch and ability to continue eating meat without compromising on health, sustainability or taste. We are trying to convince more and more people to eat less meat," says Eshchar Ben-Shitrit, CEO of Redefine Meat.

Technically, the R&D team of Redefine Meat first worked to study real cuts of meats — they even developed AI to observe the texture of meat to replicate it.

That's how they're able to match the look of a piece of 'beef' for example.

And to complete the trick, all senses have to be fooled.

"This is the blood and the perfume that actually are carriers of flavours and scents that go inside their final product," says Alexey Tomsov, food engineer for the R&D department of the company.

The exact list of ingredients is closely guarded. The company says that New Meat is made by "using a range of proprietary and patented technologies" and "plant-based ingredients," including chick peas.

As for the blood, Tomsov is not allowed to say much more.

A new one will open in the coming months in the Netherlands, where 5,000 tonnes of New Meat will be produced per year.

"We call it actually additive manufacturing, where you build the product layer by layer. That enables us to control the fibre structure to trap fat and moisture within the fibres and to create a food product that is man-made, the one that you're eating today, which is the closest thing to the biological meat that we're used to eat. And when you see it, it looks like meat, when you put it in your mouth, it feels like meat and your brain associates it with meat," says Ben-Shitrit.

Chotto Matte, the restaurant where the tasting happened, already offers New Meat on its menu.

For the last two months, it trialled the new product along with 32 other restaurants spread across the UK, the Netherlands and Israel.

Chef Sclare designed the menu around the plant-based New Meat.

He notably used the 'beef' New Meat in a spicy teriyaki, and cooked the 'lamb' New Meat with coriander and Peruvian chilli miso.

Redefine Meat intends to expand to more restaurants in Europe in 2022, and hopes to make its products available in supermarkets.

Watch the video above to see if you could tell the difference between New Meat and a regular steak.