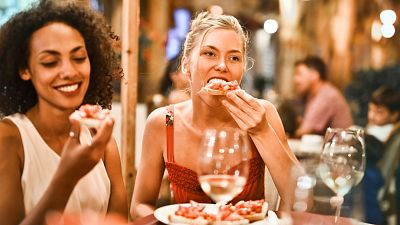 The past decade has been transformative for Europe’s meat-free culinary scene.

Measly grocery offerings and compromised restaurant menu options of Europe’s past have evolved into a plethora of dining and grocery options that make it easier than ever to go veggie.

A survey commissioned by property database Nestpick has set out 75 of the world’s best places for vegetarians to live, measuring grocery prices and restaurant availability among other factors.

Concerned vegans are guaranteed to be in safe hands - the survey also measured their dine-out options in comparison.

Whether you’re a Meat Free Mondays kind of person or an ardent vegan, we’re all trying to do our bit, and this information helps that.

Our continent leads the way with almost half of the best spots. Here’s who made the cut.

The UK is no stranger to plant-focused food on a mass scale. Walk into any supermarket chain and you’re likely to see shelves, if not aisles, of everyone’s favourite animal alternatives.

This study ranked the capital city strongly for it’s affordable fruit and veg to cook your favourite meals. There are a seemingly endless supply of supermarket chains that sell homegrown produce.

Venturing to some of London’s edgier spots brings out some amazing junk food. Starting in London’s trendy east, Temple of Seitan now has restaurants across the city that serve up the most delicious, protein-heavy, vegan goods. What’s better than a bucket of fried chicken? The guilt free alternative, of course.

Londoners with a stronger health focus have their pick of chains such as By Chloe and Leon. They are seemingly everywhere, tapping into London’s “work first” culture by serving quick, tasty wraps, salads and treats to city dwellers. Trialling eateries of this kind usually start in London and grow throughout the rest of the UK if they are met with success.

Of course Europe’s loud, proud creative hub was going to revel in a counter-cultural food movement.

Berlin can be trusted to bring the best when it comes to veggies with a sweet tooth - Brammibals Donuts is known city wide for its flavoursome offerings, including Mandarin Almond, Schwarzwälder Kirsch⁠⁠, and Chocolate Crunch donuts.

The study scored Berlin supremely well for having a number of events year-round that embrace this kind of eating. The city’s Veganes Sommerfest brings food and charitable organisations from across the country together to share what they know with thousands of hungry visitors.

When it comes to Germany, the data doesn’t lie - it’s growing embrace of a meat-free lifestyle is definitely one to watch. Of course, much of its traditional cuisine revolves around variants of Bratwurst and salami, but the story doesn’t end there.

Those stuck in the days of the country’s culinary past might find it hard to believe that it has not one, but two cities topping this list. Munich is praised here for its affordability and sheer volume of restaurants that cater to different dietary needs.

Max Pett is one of many set ups offering a gorgeous al fresco dining space with just as gorgeous food. Like this stunning salad, pictured above.

The Austrian capital entered a period of rapid transformation over the past decade, making it easier than ever for vegetarians to feel embraced by the country’s changing food culture. So much so that they rank as one of the most vegetarian cities in the world.

Almost half of Vienna’s total restaurants were reported to be excellent places for vegetarians to eat, with generous praise given for the quality of the food on offer.

Diners with a taste for fine cuisine are known to eat at Tian, a Michelin starred setting specialising in gourmet vegetarian dishes. Like what you see? They also self-produce a selection of sauces and condiments for customers to purchase.

We should have known - The British press were Glasgow as the “vegan capital of the UK” almost a decade ago. Long before meat-free eating entered public discourse and forced other cities to get on board.

Glasgow has a broader reach than any other city on this list - over half of their veggie spots were said to cater excellently to vegans too. It’s something the city is incredibly proud of.

Residents of the chilly-but-charming veggie playground can enjoy what could be considered an empire of adjoined eateries.

Mono, Stereo, The 78, and The Flying Duck are all highly regarded sister restaurants with trails of excited reviews from residents old and new. Vibrant, generously priced, serving the least junk-y junk food around with a distinct bar feel.

Nobody goes to Zurich for a cheap getaway, which might explain why it ranks as a touch more expensive than the other cities on this list. The cost of living here is a whopping 41 per cent higher than Paris.

What Zurich suffers with in cost it makes up for in local range. Supermarkets keep their shelves well stocked with soy, tofu, grains and veggies - you can guarantee your food shop will be a lot cheaper than your restaurant bill.

That’s not to say Zurich’s vegetarian specialities aren’t a sight to behold - they lay claim to the Guiness World Record for the world’s oldest vegetarian restaurant. Hitl has sat in the heart of Zurich since 1898 and continues to delight people with over 100 different buffet options to this day.

We’ll take all of it, thanks.