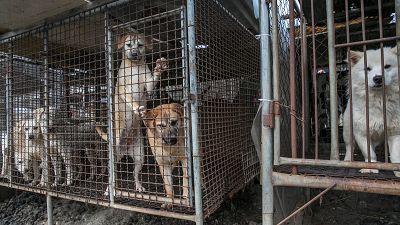 The custom of eating dog, long popular is southeast Asia, is falling out of favour with the public and government alike   -   Copyright  Jean Chung/HSI
By Tim Gallagher  •  Updated: 29/01/2022

Dog meat may soon be outlawed in the South Korean capital of Seoul, as a municipal council member has called on the mayor to ban its consumption.

The proposed bill would put a stop to eating dog meat and promote a dog-friendly culture in Seoul, but with dog meat a centuries old delicacy on the Korean peninsula (and southeast Asia more widely) how has this shift in attitude come about?

In South Korea up to 1.5 million dogs a year are raised for their meat with many sold to butchers for Bok Nal season across July and August.

Research commissioned by Humane Society International (HSI) shows that Seoul has an estimated 436 dog meat restaurants, with most dog consumed on Bak Nol, the three hottest days of the year according to the lunar calendar.

Dog meat soup is considered to have health properties, including keeping the body cool in the hot summer months. Some Koreans also go to traditional medicine shops to buy gaesoju, a drink made using herbs and dog meat which is believed to be a health tonic.

However, in 2021, the South Korean government announced it was planning to set up a task force considering a national ban on the eating of dog meat, with a poll the previous year showing 84 per cent of South Koreans don’t consume it.

The practice is also falling out of favour in the wider region with bans already in place in Hong Kong, Taiwan, Thailand and Singapore as well as two cities in mainland China.

But with eating dogs once so common across the Korean nation, the question remains, why now?

Dog meat campaign manager for HSI, Nara Kim, believes there is a generational shift in mindset towards eating dogs.

“It’s largely consumed by the older and male generation,” she tells Euronews.

“Most young Koreans are appalled at the idea of eating dogs, and see dogs as companions.”

Pet ownership in Korea has increased in recent years and in 2019 the South Korean Ministry of Agriculture, Food and Rural Affairs found that nearly 5 million households owned a pet dog.

“Sharing your life with a dog means to intimately understand them,” says Kim.

“That bond means it’s harder to dismiss the suffering of dogs reared and killed for meat.”

Closeness to animals preventing ignorance of their suffering is a key theme of the theory of carnism.

Carnism, a process whereby some animals are categorised as meat and others as lovable companions, explains that farm animals are painted as abstract and monotonous. Kept far out of sight of humans, these animals which are reared for meat are easy to ignore, unlike pets.

“We treat different animals very differently simply because we’ve been conditioned to do so,’ says Melanie Joy, a social psychologist and leading expert on carnism.

Joy purports that carnism is ubiquitous but culturally specific. Each cultural group believes the animals they eat to be natural, and are averse to or even disgusted by alternatives.

But that doesn’t mean social attitudes are set in stone.

“When a behaviour is opposed by enough people in society it reaches a tipping point and changes,” Joy adds.

Globalisation and the Korean Wave

The South Korean government has been actively engaged in a soft power initiative to increase the nation’s influence which has seen Korean media take over the world.

Reflected in the popularity of “Squid Game,” “Parasite,” and k-pop sensation BTS, the dominance of Korean exports has undeniably impacted the global media landscape.

But with this visibility comes scrutiny, with the same forces of globalisation that enable the so-called Korean Wave are now creating problems for dog meat eaters at home.

The first language that Joy’s book “Why we Love Dogs, Eat Pigs, and Wear Cows” was Korean, and it was a bestseller in Seoul.

“Some people in South Korea are concerned with how they’re perceived by people in the rest of the world who don’t eat dogs, that furthers the conversation,” says Joy.

Indeed, the proposed bill to ban eating dogs in Seoul explicitly acknowledged the global treatment of dogs as family members and companions, and similar sentiments accompanied the prohibitions in China.

But this doesn’t mean that the paradigm shift on dog meat is purely a western import, with a balance needing to be struck between global pressure and Korean concerns for animal welfare when considering driving factors.

“Often I hear westerners saying that the west shouldn’t impose its animal welfare sentimental views on Koreans…that makes me exasperated.

“We are capable of caring about animal welfare on our own, and dog eating does not define our culture.”

Elsewhere attitude shifts have already occurred against battery farming, eating veal and wearing fur, and with climate concerns driving a shift to plant-based diets perhaps we will see the back of carnism for good.