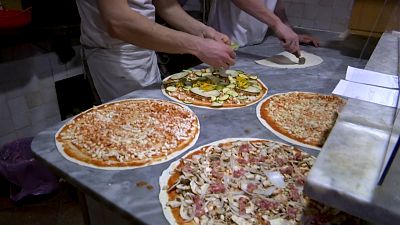 Pizza chefs in Rome were busy on Monday making one of Italy's most famous foods, pizza, on the day Italy celebrated St Antonio Abate (or Saint Anthony the Abbot), the patron saint of 'pizzaioli'.

Other countries honour the saint on January 17 in myriad ways, but here it's all about making simple, traditional food.

As connoisseurs of the art of making pizza, pizzaioli joined the UNESCO's List of the Intangible Cultural Heritage of Humanity in 2017.

According to UNESCO, the real art of the pizzaiolo "is a culinary practice comprising four different phases relating to the preparation of the dough and its baking in a wood-fired oven, involving a rotatory movement by the baker."

What kind of pizzas are being made in Italy on this day?

It said the practice originated in Naples, the capital of the Campania region, where about 3,000 pizza-makers live and work.

But every day is pizza day in Italy through the eyes of some tourists.

"Here we are in Italy, I frankly had no idea that today was the 'pizza day' but we're enjoying some very good pizzas here in Rome with my friends," says Spanish visitor Gloria Montaves.

"I really like this kind of food because there are so many types and varieties and it's a really good plan to do with friends."

Francesco Fiore is a pizza chef at 'Da Baffetto', a famous pizzeria in the center of Rome.

This pizzeria specialises in Roman pizza, whose dough is thin and crunchy, as opposed to the Neapolitan one which is thick and soft.

One of the simplest and most common types of pizza is, of course, the 'Margherita' – made with tomato sauce, mozzarella and basil.

According to a popular legend in Italy, the Margherita was named after Queen Margherita of Savoy, the wife of King Umberto I, and the colours of its toppings are those of the Italian flag.

However, chef Fiore has no reservations about creating controversial requests for tourists. Namely, the pineapple and ham concoction better known as the 'Hawaiian'.

"It's one American tourists, in particular, ask for: the famous Hawaiian pizza," he explains.

"I never tasted it but, let's say, among the Americans it is quite requested and we have no problem making it."