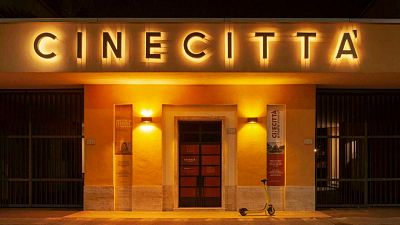 Once dubbed the 'Hollywood on the Tiber', Rome's renowned Cinecittá film studios are in the process of a €260 million renovation.

Cinecittá was at the heart of the golden age of Italian cinema and now hopes to regain some of its former lustre thanks to European Union post-pandemic funding.

"We can give back to this place the light that has always characterised it, and that it deserves," says Nicola Maccanico, Cinecittá CEO.

'The city of cinema'

The studios were inaugurated on the southern outskirts of the Italian capital in 1937 to churn out propaganda for the Fascist government of Benito Mussolini.

And they have since endured the upheavals of Italy's modern history: the Allied bombings in 1944, the repurposing of the studios as housing for people displaced by war, the economic 'miracle' of the 1950s-60s and the subsequent decline.

In its heyday during the golden era of film, major Hollywood blockbusters such as 'Ben-Hur' in 1959 and some of world cinema's most seminal works like Fellini's 1960 'La Dolce Vita' were filmed at Cinecittá.

But since the end of the 1960s, it has been unable to recapture its former prestige, due to competition from television and major international productions opting for better-equipped studios elsewhere.

In recent decades, although critically acclaimed films such as Bernardo Bertolucci's 1987 'The Last Emperor' and Anthony Minghella's 'The English Patient' in 1996 were shot at Cinecittá, major productions have become more scarce.

The studios' current inability to meet potential demand from TV series and films due to the too-small size of its stages and other deficiencies costs Cinecittá about 25 million euros per year.

What would the renovation include?

"For Cinecittá, this is really a unique opportunity because it brings together two situations that are difficult to reproduce: the recovery plan and a booming market," Maccanico said.

The lion's share of the money would help double the surface area of the studios, which currently cover about 99 acres (40 hectares), with the creation of five new sets and the renovation and expansion of five others.

Further improvements would include an indoor pool for underwater filming, a theatre with a 360-degree green screen and two sets for virtual reality with LED panels.

Maccanico said that the increased number of platforms for content today had created unprecedented opportunity for film studios.

"It's within this market context that the idea of re-launching Cinecittá was born... making it a new reference hub for the new European audiovisual production market," he said.

Check out the video for a look around the current Cinecittá Studios.

Alec Baldwin's phone to be searched in shooting investigation