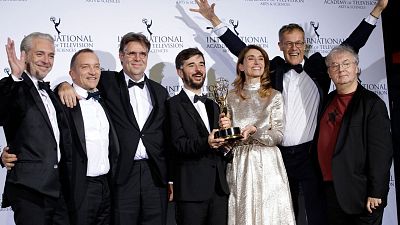 The show's cast and crew gathered at the New York ceremony to celebrate their Emmy win   -   Copyright  AFP
By Shannon McDonagh  with AP  •  Updated: 23/11/2021

France's 'Call My Agent!' took home Best Comedy at the International Emmys last night in a category otherwise dominated by the UK.

Known in its home country as 'Dix pour cent', the show first appeared on network France 2 before making waves on the international drama scene by appearing on Netflix.

It tracks the events of fictional talent agency ASK, featuring a rotation of real-life famous faces such as Charlotte Gainsbourg and Isabelle Huppert as their clients.

The series has received acclaim ever since with worldwide adaptations ongoing in Turkey, South Korea, India, and the UK, featuring their own homegrown stars.

Writer Victor Rodenbach said that his show is about "having passion and creativity in your life and how it brings on challenges but also a very special unique kind of intensity and joy and excitement."

"And that's what we're feeling right now ... It actually feels like a really perfect 'Call My Agent!' moment," he said.

The International Emmys take place each November to recognise the achievements of visual media outside of US television. 600 television professionals and three rounds of voting decide on the winners and nominees.

With a similar trajectory to 'Call My Agent!', the series really took off internationally when platformed by a streaming service. In this case, Apple TV+, who renewed it for a second series this year.

In accepting the award for best drama, 'Tehran' executive producer Dana Eden used her speech to say that she hopes that one day, "we can walk together – the Iranians and the Israelis – in Jerusalem and Tehran as friends and not as enemies."

"Tehran is not only an espionage series, it's also about understanding the human behind your enemy, and we're doing it every day on our set," she said, adding that the show was in the middle of filming its second season working with Iranian refugees.

"Actually we found out that we have a lot of common. So I think it gives a hope for the future."

While most of Squires' speech, done over a video link, was muffled and unintelligible due to a technical issue, Tennant used his virtual speech to say he felt "humbled and honoured."

He thanked his wife Georgia, although it was the wee hours in the UK during the show.

"She's probably fast asleep by now but if you do wake up and see this, Georgia, I love you, mwah," said Tennant, who said he was in a hotel room in Scotland shooting a project.

Thomas Bellut, a longtime German journalist and director of the TV channel ZDF, was honoured with the Directorate Award for his body of work, which includes covering the peaceful revolution in East Germany and the reunification of the country over 30 years ago.

He dedicated his award to journalists around the world he said haven't been as lucky as he.

"I was lucky to be able to work for almost 40 years in the media business without pressure from authorities or governments," he said.

"This is something fewer and fewer creative minds and journalists worldwide are able to do, therefore I would like to dedicate this Emmy in honour to our colleagues on all continents who cannot work freely and who are put under daily pressure by their authorities. We must never forget them or leave them behind to fight alone."

Other winners of the International Emmys include Thailand's 'Hope Frozen: A Quest To Live Twice' for Best Documentary; Norway's 'Atlantic Crossing' for Best TV movie/miniseries; China's 'The Song Of Glory" for Best Telenovela; and Best short-form series to New Zealand's "'iNSiDE".