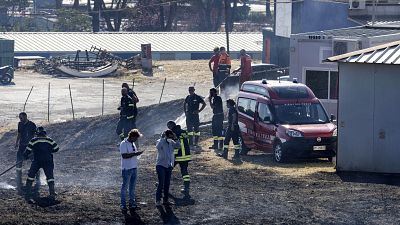 A fire broke out on Monday afternoon at Rome’s legendary Cinecittà Studios.

The flames, brought under control in the afternoon by three teams of firefighters, did not cause any victims or injuries and would have caused, according to the Italian authorities, only minor damage. Thick black smoke was visible from various locations in the Italian capital.

“The fire has been extinguished. There are no injuries, no poisoning, no serious material damage,” Studios spokesperson Marlon Pellegrini said in a statement.

A set, which depicted Renaissance Florence, was being decommissioned, and firefighters said that “much of the papier-mâché reconstruction has been destroyed”, but that the flames were limited and under control.

The fire disrupted filming of a Charlize Theron movie, the sequel to Netflix film The Old Guard, according to production coordinator Natalia Barbosa.

It was not immediately clear what caused the fire - although much of Italy is a tinderbox this summer due to a severe drought - and the Italian police has stated it will launch an investigation to determine the causes.

This is not the first time the studio suffers a major fire; in August 2007, a warehouse where the sets of television series “Rome” were stored went up in flames, before the fire spread to other buildings in the complex. Approximately 32,000 square feet of studio space were destroyed.

The mythical cinema studio, once dubbed the 'Hollywood on the Tiber', was inaugurated in 1937 to churn out propaganda for the Fascist government of Benito Mussolini.

It is the oldest and largest set of film studios in Europe, and more than 3,000 films - including William Wyler’s Ben-Hur, Federico Fellini’s La Dolce Vita, Joseph Mankiewicz’s Cleopatra and Martin Scorsese’s Gangs of New York - were filmed there.

In recent decades, major productions have become scarcer, although the studios are planning a major makeover using money from the European Union's post-pandemic recovery fund.

The management of Cinecittà unveiled last year a development plan of €260 million, with the ambition to become by 2026 “an important European cinematographic pole”, betting on series and TV programs. Further improvements include an indoor pool for underwater filming, a theatre with a 360-degree green screen, and two sets for virtual reality with LED panels.

It is unclear at this time whether this latest fire will dent or delay these renovation plans.