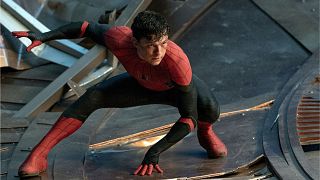 As glowing reviews pour in for the much-delayed newest 'Spider-Man' movie adventure, film experts predict the Marvel spectacle could set pandemic-era sales records around the world.

Released on December 15, the third installment of Tom Holland's journey as the superhero is set to make €133 million world wide in its first week.

Cinemas across Europe are even displaying the film every half an hour during peak times to cope.

Between the hours of 6:30PM and 10:45PM today, Berlin's 'CinemaxX Potsdamer Platz' will show the film 13 times.

London's 'VUE' – one of the biggest cinemas in the city's famous West End – is holding viewings every 20 minutes to half an hour from 6PM onwards.

At Moscow's 'Formula Kino', there are almost 20 opportunities to see the film every day, with final displays not concluding until the early hours of the morning.

A run this successful could see the superhero movie topple James Bond's 'No Time To Die' as the highest grossing English-language film of the pandemic era.

A cinema-exclusive release is bringing people back into theatres

'Spider-Man: No Way Home,' produced between Sony and Walt Disney, stars Brit Tom Holland as Marvel's web-slinging superhero and Zendaya (who bagged an Emmy last year for her performance leading HBO's 'Euphoria') as his girlfriend, MJ.

The film hopes to benefit from a cinema-exclusive release, unlike the hybrid models chosen by the producers of 'Dune' and 'Black Widow'.

As of December 16, 'No Way Home' had earned a 94 per cent positive score from 140 reviews collected on the Rotten Tomatoes website. Supporters said the storyline would please old and new fans alike.

"'Spider-Man: No Way Home' is a goliath that feels destined to eat the world, a potent combination of the ongoing Marvel Cinematic Universe and nostalgia for what came before," said Esther Zuckerman of Thrillist.

Charlotte O'Sullivan of the London Evening Standard called it an "instant classic".

Of the insights that were less-than-complimentary, Paste Magazine's Jacob Oller labelled the film the result of "a self-aware meme machine", concluding it was lacklustre and overly corporate.

'We've worked so hard on this film', says Holland

The holiday season around Christmas typically ranks as the second-biggest movie-going period of the year, but recent box-office tallies are hovering well below pre-pandemic levels.

Steven Spielberg's 'West Side Story' remake disappointed with $10.6 million in US ticket sales last weekend, prompting new questions in Hollywood about what it will take to attract crowds back to theatres.

US audiences won't be treated to Spidey and his friends/foes for another two days after Europe – the film premieres there on December 17.

First-day presales for 'No Way Home' were the highest recorded by ticket seller Fandango since 2019's 'Avengers: Endgame,' the second-highest grossing movie of all time.

"We've worked so hard on this film," Holland said in an interview with Reuters.

"For it to be so well-received is awesome."

Paul Dergarabedian, senior box office analyst at Comscore, says the film's debut will "wash away much of the negative news that came before" and "hit a positive reset for theatres as we head into the box-office year of 2022."

Hollywood will closely watch this weekend's results to help gauge the future of movie-going amid the rise of streaming television.

Tom Rothman, the head of Sony's movie division, reckons the rush for advance tickets to 'No Way Home' showed "people are ready to get back to the big screen."

"This movie was made for movie theatres," he says.