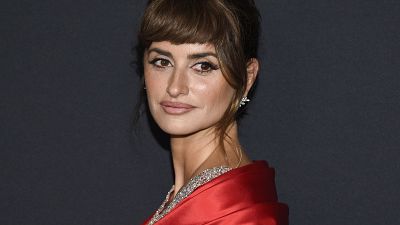 Penélope Cruz was honoured at the Museum of Modern Art in New York on December 14.

It was an A-list extravaganza as Cruz was joined by peers Anne Hathaway, Ricky Martin, Leslie Mann and Oscar Isaac on the red carpet the celebrate her impact on global cinema.

At the tribute, Cruz recalled the Betamax videotape store that opened in her childhood neighborhood, a suburb of Madrid, that made her discover cinema.

It was there she rented all the films of Pedro Almodóvar, who went on to become one of the most important partnerships of her career.

"I'm very grateful to a lot of amazing directors that have given me great opportunities," she explained,

"But I've done eight movies with him and he's also like a family member. It's a very special relationship that that we have, so this is one more opportunity for me to say thank you to him."

The recognition comes a decade after the museum paid the same tribute to Almodóvar, who has worked with Cruz. Their latest film, 'Parallel Mothers' starring Cruz, opens in the United States on December 24, and received two Golden Globe nominations.

From Oscar crowns to Chanel gowns

MoMa's annual film benefit has been presented since by Chanel since 2011.

Cruz honoured them by wearing a long red Chanel v-line dress with an open back – she has, after all, been an ambassador of the fashion house since 2018.

Fellow actress Anne Hathaway, who is currently filming period feature 'Armageddon Time' with Anthony Hopkins on board, fawned over Cruz's sense of style on the red carpet.

"Everything she wears (...) you kind of enter a world of fantasy and fairytale, but it's always rooted in intelligence and design and that's just a great combination," Hathaway said.

Check out the video above to see the stars gathering to recognise Cruz's achievements.

Meet the rock photographer who put The Charlatans in a lake