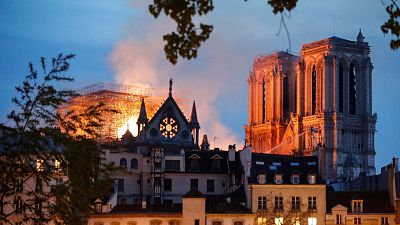 The divisive future interior design of Notre-Dame de Paris was approved on Thursday as part of recovery plans from its devastating fire.

This comes just 24 hours after 100 key figures in arts and academia published a petition asking for the design to be simplified in order to honour the building's heritage.

A vote took place after a closed-door deliberation between a 24-person committee of architectural experts, politicians, and religious figures.

National Heritage and Architecture Commission (CNPA) – whose approval was required for these plans to go ahead – asked for just two reconsiderations for the much-awaited renovation.

They want the statues lining the walls of the cathedral to be kept in place and a rethink of installing modern, moveable pews by keeping Notre Dame's original seating.

The diocese intends to take advantage of the restoration of the famous Gothic cathedral, ravaged on April 15, 2019 by a gigantic fire that shocked the whole world, to give it a new lease of life, before its reopening scheduled for 2024, in time for the Olympics.

The fire left one third of the cathedral's roof intact, with debris caving in and destroying parts of its interior.

The building as we once knew it was designed by Eugène Viollet-le-Duc between 1844 and 1864.

It has gone through minor restorations since, but nothing of this scale.

Sceptics of the shift in direction argue that muddling new influences will degrade the religious symbolism of the original building.

The French National Assembly rejected this approach, enacting a law in July 2019 that required the restoration to preserve the cathedral's “historic, artistic and architectural interest”.

Despite this, early feedback on the redesign has labelled it "kitsch" for honing in on the aspect of "visitor experiences", rather than the building's legacy.

A column published in French daily Le Figaro claims these ideas will "completely distort the decor and the liturgical space" and create a crisis of personality.

The redesign hopes to create a "dialogue" between contemporary and traditional art from the old masters and a wide range of influences will be at play.

French father of urban art Ernest Pignon-Ernest, sculptors Anselm Kiefer and the late-Louise Bourgeois could see their works merge with those of old masters like the Le Nain brothers or Charles Le Brun.

The Ministry of Culture says they are "not at all opposed" to these sorts of examples.

Light at face height, benches on casters with lights to replace age-old chairs, are also part of the project.

How does the selection process work?

The CNPA must, first of all, examine whether the plans respect "heritage laws" and "reversibility (of certain choices)" says Senator Alberic de Montgolfier, who chairs it.

He welcomes the "many reconciliations" that have taken place since the start of the project two and a half years ago between "visions that could be opposed".

On the menu of the announced renewal: an airy route for tourists and faithful from all over the world around a refined central axis, from the nave to the choir, which hosts 2,400 offices and 150 annual concerts with a "deep cleaning" of the 14 chapels, already dilapidated before the fire.

This cleaning should make it possible to rediscover the 'Mays', large altar paintings ordered each year from great artists, between 1630 and 1707, by the corporation of goldsmiths who offered them to the cathedral.

Honorary General Curator of Heritage and a great friend of the French painter Pierre Soulages, Alfred Pacquement, is a supporter of a renewal "which respects the architecture, history and the sacredness" of the religious edifice.

So much so, he "would find it a shame that nothing changes."

What are the most mispronounced words of 2021?