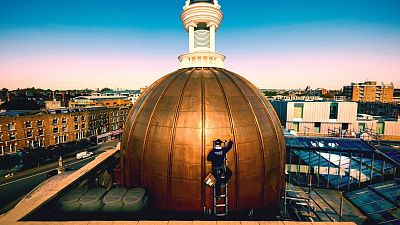 Historic London music venue KOKO, where the likes of Madonna, Prince, Amy Winehouse and Coldplay have performed, will re-open next spring following a €85.9 million revamp.

Located in Camden, North London, the site was left badly damaged by a fire in January 2020, which destroyed its iconic roof dome. Efforts to save the building meant it was left with intense water damage that rendered it unusable as a music venue.

Initially, there were fears this would ensure the closure of the listed building. But already present expansion plans that preceded the fire by several years meant there was simply a little more work to do in order to get the venue back to its best.

KOKO is a quintessential part of London's live music scene

KOKO, originally a 19th-century theatre where Charlie Chaplin once took to the stage before it was turned into a broadcasting centre, has been under construction and restoration for three years.

For decades it has been a tour highlight for smaller artists and the perfect opportunity for big names to play secret shows.

Kanye West famously kept the venue open until the early hours of the morning for a surprise set in 2015, and Ariana Grande invited fans to a last-minute launch of her album, Sweetener, in 2018.

"I'm excited to announce that we will be returning KOKO to the musicians, artists and fans next spring with a beautifully restored theatre and live music offering that will hopefully be a truly unique and unparalleled experience for everyone coming through the doors," CEO and founder Olly Bengough said in a statement on Thursday.

"We are as committed as ever to protect our 120-year cultural legacy and to support the next generation of musicians and London’s dynamic and ever growing music scene.

How has the venue changed?

The multi-million investment has seen three buildings - the former theatre, an old pub and ex-piano factory - merged, a four-storey extension, and the restoration of the theatre's dome.

KOKO's purpose spans beyond concert-going this time around. Visitors will be welcomed into piano and vinyl rooms, a library, dome cocktail bar, penthouse and a hidden speakeasy.

There are also plans to launch a radio station and a charitable foundation when its doors finally open to the public.