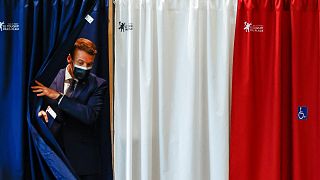 Earlier this month, aides of President Emmanuel Macron revealed that the shade of blue used in France's national flag has changed.

More than that, the switch took place over a year ago – and nobody had noticed.

The blue in France's tricolore had been adjusted to a darker navy in a subtle, but significant shift.

Now the shade sits closer to that of the flags used in the French Revolution. Officials describe the change as a "more elegant" adjustment.

Flag changes don't happen often in Europe, but when they do it can be the mark of serious historical events, political changes, or just pure aesthetics back and forth.

Here are some of Europe's most significant flag changes over time.

A deeper shade of blue: France

It's no wonder the people of France didn't notice the colour change.

France have used lighter and darker tones of blue for decades, depending on the occasion.

However, this is the first formal colour change since 1976, when President Giscard d'Estaing switched the palette up to align closer to the blue of the European Union's flag.

This is an interesting example of good old colour theory coming into play. Notice how the red on the new flag looks deeper, almost? It's not – the new blue is doing all the work there.

Greece was one of the first countries in the world to use flags in any representative sense, but this wasn't without a multitude of teething issues.

They simply weren't something on the radar for ancient civilisations.

Several unofficial flags were distributed during the Ottoman period, including a red and yellow Byzantine double-headed eagle.

Proposals for Greece's first proper flag was proposed by Greek writer and political thinker Rigas Feraios as part of proposals for a pan-Balkan federation in 1797.

As you can see, it differs wildly from the series of designs that would feature as part of Greece's national identity.

The four designs featured above are just some of several different flags the country adopted at various points in time.

Greece's rich and complex history meant it went through a series of changes featuring different patterns and symbols before settling on I Galanolefki – 'The Blue and White', in 1978.

Four bars Azure, four bars Argent are believed to represent the sky and sea, accompanied by the traditional Greek cross.

Realising your flag is the same as another country: Liechtenstein

Europe's fourth-smallest country produced a simple and straightforward red and yellow flag design based on its coat of arms when it was awarded sovereignty in the early 18th-century.

Towards the end of Prince Aloys II's reign the colours were changed to reflect the country's coat of arms, keeping the red but ditching the yellow in favourite of the embracing full primary colour spectrum.

A partnership with Switzerland in 1921 saw the colour scheme rotate from vertical to horizontal to represent the nation's renewed status in Europe.

All's well that ends well. But not for long.

Preparations for the 1936 Berlin Olympics revealed a crucial mistake – Liechtenstein had the same flag as Haiti and went unaware for 16 years.

The flag was changed the following year by adding the Prince's crown to the top left corner.

Historically, one of the most common reasons for flag changes in Europe has been the formation – and dissolution – of the Soviet Union.

Each country in the Soviet Union was forced to abandon their own flags in favour of the classic hammer, sickle, and star iconography throughout the 1920s.

Ukraine's original flag was outlawed upon joining the Union in 1922 and it took decades to develop its Soviet iteration, pictured centre.

When the country became independent in 1991 it sought to honour its once suppressed half-blue, half-yellow design but opted to distinguish itself from the shade of blue the Soviets borrowed for their original People's Republic flag.

With this came the introduction of a darker blue, a 'strong azure' to be exact. These days it's not uncommon to see both, though official flags will always don the latter.

Mark of a partnership: United Kingdom

Prior to the United Kingdom's formation in 1707, each country's flag existed as a separate design.

The kingdom managed to exist for almost 100 years without a real representation of the joining of its countries. That all changed in 1801, through the creation of the Union Flag, or Union Jack.

Wales weren't included as they were already considered part of the 'Kingdom of England', resulting in a combination of English, Scottish, and Irish flags.

It's regarded as first design revamp to reflect such a significant shift in geographical and political ties.

The addition of the St. David's dragon would likely complicate matters this far down the line.

Of course, each country still use their individual flags across government, sports, and national events.

The grass is always greener: Republic of Ireland

If someone asked you to choose a colour best associated with the Republic of Ireland, it's highly unlikely you'd choose blue.

Nevertheless, the flags that came before Ireland's own tricolour look vastly different to the green, white, and gold introduced during 1916's Easter Rising.

The purposeful departure from the lesser-known blue designs that ruled throughout history was designed to represent unity between nationalists and unionists.

Before that, the banner known as the 'Lordship of Ireland' – used for over 300 years - featured three crowns on it. A harp was brought into the mix following Henry VII's influence and lasted hundreds more years.

You'll still see the harp around in Irish culture, most famously as Guinness' iconic logo.

Denmark's flag is the oldest continuously used flag in Europe – it was first used as a collective national symbol in 1219, during the Battle of Lyndanisse.

Legend has it that piece of red cloth on a white cross fell from the sky during combat that made Danish soldiers believe it was a sign from God.

That doesn't mean that it was for everyone, though.

Danes viewed their flag as a strictly royal emblem for hundreds of years. Between 1834-1854 ordinary citizens were even banned for displaying it in their homes, until the establishment realised it could be a useful source of unity in trying times.

The Second Schleswig War between Denmark and Germany, for example.

This flag provided the model for the "scandi cross" and in the centuries that followed Finland, Norway, Sweden, and Iceland would follow suit with similar styles.

Olden is golden, after all.