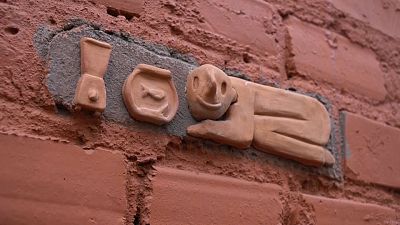 A functioning laminated plastics factory has taken on a secondary role in St.Petersburg: it's also a popular street art museum and gallery.

"We have a symbiosis. We have fused two worlds together: The factory doesn't close. First and foremost, this is a real factory. It is influenced by the museum" says guide to the Street Art Museum, Zoya Buksha.

"However this is a collective which enhances both institutions. In my opinion, they support each other`" she adds.

The factory boasts temporary and permanent art collections including dozens of works by contemporary artists, attracting locals, creatives and tourists from all over the world.

"I wanted to see something extraordinary, not just cathedrals and museums. I searched for unusual places in St. Petersburg, and the internet recommended this place, and I decided to go" says Natalya Romacheva, visitor from Moscow.

The permanent exhibits are based within the factory's production areas.

While tours regularly flood the grounds, for the workers, it makes for a refreshing change of scenery.

Naples' murals are a battleground for justice and a brighter future