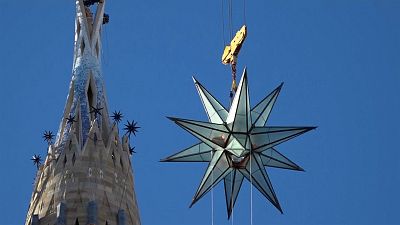 They say that Rome wasn't built in a day, and neither was Barcelona's La Sagrada Familia.

This weekend, a giant five-tonne star has been hoisted atop the forever-incomplete basilica's new Tower of the Virgin Mary, the tallest of what will one day be 18 spires.

Construction on the religious masterpiece has been in progress since 1882.

Reactions to 'Bethlehem's Star' suggest the addition marks another blow to the "world's oldest building site".

But what has taken it Sagrada Familia so long to come in the first place?

Here's a timeline of all of the wars, disputes, and deaths that have halted its progress.

Bookseller Josep Maria Bocabella returned from a trip to the Vatican in 1872 inspired by the grand Catholic works of art that dominated the city's skyline.

He spent eight years campaigning and fundraising for Barcelona to develop a brand new cathedral.

Using his connections as founder of one of the city's Spiritual Associations, Bocabella enlisted architect Francisco de Paula del Villar to come up with a design inspired by the neo-gothic cathedrals across Europe.

Land was purchased Barcelona's Eixample district for a then-equivalent of €1,034.

Their partnership would last less than a decade of the building's arduous lifespan after a number of conflicts arose about Sagrada Família's intricate design.

Bocabella envisioned it being Europe's tallest, dwarfing the likes of St. Peter's Basilica.

It soon became apparent that the project required someone that could cope with its immense technical demands and monetary costs.

All that remains from this original architect's vision is the building's crypt. Bocabella ploughed onwards, seeking someone with dreams as big as his.

1882-1884: Land found and foundations laid, the introduction of Antoni Gaudí

Antoni Gaudí's unbridled ambition saw the project take a completely different shape in 1883, a year after its cornerstone was laid by Bishop Urquinaona.

As Chief Architect, he reimagined the basilica as a vast, nature-influenced, form, full of Art Nouveau-inspired curvature and 12 towers – one to represent each disciple.

Modernist Gaudí knew from the start that this would be no easy task – he was vocal that construction works would not be completed in his lifetime.

Much of his work was spent developing deeply detailed 3D models instead of traditional sketches to ensure whoever the project was passed on to would know exactly how it was supposed to look.

When asked if this would be problematic for his vision, he'd respond: "My client (God) is not in a hurry."

The architect would juggle the Sagrada with other clients until 1914, where he set everything else aside to work on it exclusively.

Gaudí would go as far as leaving his home Park Guell (now a museum in his name) to move in to the building site.

1926: Gaudí dies in a tragic accident

After devoting himself to the Sagrada for 43 years, Antoni Gaudí was hit by a tram while walking to confession, as he did every day.

The 73-year-old's unkempt appearance lead people to believe he was a beggar, rather than Spain's most famous architect. Hygiene and nutrition had been shunned in the name of his passion project.

A funeral procession was attended by thousands of mourners, concluding at the incomplete, but tremendous, church.

Gaudí only lived to see one of the holy space's iconic bell towers finished the year prior.

The basilica stood at 15-25 per cent complete the year it lost its creator.

His accidental death derailed any progress entirely for over a decade.

A time of civil unrest sees anarchists break in to Gaudí's former office.

Models are smashed, plans are burned, and the church's crypt is ruined in the process.

More devastation follows as 12 people involved in sustaining the creation are killed in the war.

Construction is halted ever further as the remaining members of La Sagrada Familia's team painstakingly try to put together the salvageable pieces.

Though its exterior went untouched, no real progress is made until the end of the war in 1939.

Influential British novelist George Orwell pays the site a visit in one of its biggest periods of stagnancy.

He described the cathedral as "one of the most hideous buildings in the world."

“Unlike most of the churches in Barcelona it was not damaged during the revolution—it was spared because of its ‘artistic value,’ people said. I think the Anarchists showed bad taste in not blowing it up when they had the chance.”

1939-1986: A revolving door of architects and funding problems

Work ploughed on through Francisco Franco's long dictatorship over Spain.

Franco showed little interest in La Sagrada, but there was little he could do. Gaudí had insisted it be funded by the people of Spain's Catholic community.

Four different architects took control of proceedings at this time: Francesc de Paula Quintana in 1939, Isidre Puig i Boada and Lluís Bonet i Garí in 1966, Francesc Cardoner i Blanch in 1983, and Jordi Bonet i Armengol in 1985.

No landmarks were reached until 1976, when the bell towers accompanying Gaudí's Passion Facade were completed, giving Spaniards a real sense of what could become of the final product.

After Gaudí's contributions to the cathedral were declared a UNESCO World Heritage site in 2005, things were on the up for the 200-strong team behind La Sagrada.

That was until the government tabled proposals that would see a high speed rail network run underneath foundations that were almost a century old.

Questions were raised about how this could affect the structural integrity of the building. With so much left to do, it was the last thing the architects and engineers needed,

Construction began in 2010 after government officials insisted the underground tunnels would not hinder any ongoing work.

The service became active in 2013, rendering a six-year battle to get it stopped pointless.

Pope Benedict XVI paid a visit to La Sagrada in 2010 to consecrate it as an official basilica.

6,500 watched the mass from the inside and over 50,000 people gathered on the streets to receive communion from hundreds of bishops and priests.

A mere 15 years ago, there was no roof on the inner part of the church, as it stood between two facades with eight bell towers, one side looking like a sandcastle, the other a work of art inspired by cubist painting.

An organ was installed and the main nave covered to allowing religious services to be conducted.

Like all things La Sagrada, an official weekly service wasn't put in place for another seven years.

Now, it's open to visitors every Sunday at 9 am.

La Sagrada Familia is now so old parts completed in the early 20th century have had to be refurbished.

At this stage the Spanish government decide to turn up the heat in a long battle for some sort of financial contribution from the developers.

Threats were made that if the project didn't carry a license, building work could no longer take place.

UNESCO was able to assist matters in 2017 by paying €37 million for the permit oversight. But the government insisted they needed assurance that the planning was above board from here onwards.

A seven-year permit is granted and a completion year of 2026 is set.

Should the timings fall into place, the basilica will be completed on the centennial anniversary of Gaudí's death.

That was, of course, until COVID-19 hit Europe two years ago.

Things were plain sailing for two years until a global pandemic was sprung upon society as we know it.

COVID halted construction on the structure for the first time since the Spanish Civil War saw parts of it devastated.

Several months of inaction last year have likely pushed the 2026 deadline backwards as the team behind its completion try to cover lost ground.

This also proved a tragedy for La Sagrada's funding pipeline – per Gaudí's request that the project not run on corporate donors, personal donations and ticket sales were going to ensure €36 million was paid to the Spanish government in arrears until 2026.

20 million people visit the area each year to admire the church's exterior and 4 million of those end up being paying customers at the cost of €26 a ticket.

It's not all doom and gloom – crucial steps are being made, such as the completion of towers and the addition of decorative elements like the aforementioned 'Bethelem Star'.

And La Sagrada Familia has also been reopened for public entry for some time.

Gaudí was right – he'd never live to see the day this project reached its immense potential.

Though this process has been plagued by ill-judged decisions, finances and global disruption, at its core are a team of people wanting to retain the integrity of a space he worked so hard to build.

We look forward to seeing it come alive, whenever that may be.