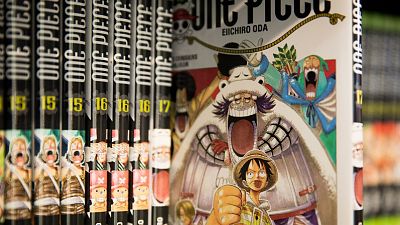 With 250,000 copies in French bookstores, the publication of volume 100 of the One Piece series on Wednesday is the biggest launch ever seen in Europe's manga comic production.

Glénat Editions has published the Eiichiro Oda series since 2000.

Started in three years earlier by the promising young designer, Oda is now considered a legend in the extensive global manga community.

The industry behind him is now a well-oiled machine. In its original version, in Japan, this volume 100 was published in early September. An adaptation for the small screen should follow shortly.

"250,000 is the draw for a Goncourt prize," Glénat manga editor Benoît Huot says with pride.

This particular comic tells the story of pirates in search of a fabulous treasure – the 'One Piece' – lead by Monkey D. Luffy, a character who wants to become king of pirates.

If you don't know One Piece itself, you may recognise Luffy dressed in his famous straw hat.

The originality of the scenario, the mystery of the characters, the subtle mix of humour, fights, emotions and flashbacks ensured a worldwide success.

Over 490 million issues of One Piece are circulation worldwide and France is firmly positioned as Europe's biggest market for it. The collection and trading of different Japanese strips is wildly popular and thousands of fans gather at conventions each year as their favourite characters.

Comic books, namely manga, were a key sector to benefit from France's Culture Pass for teens.

"The craze has grown over the course of the series. Between volumes 12 and 23 a narrative arc was set up, the Alabasta saga, which fascinated more and more readers in France," recalls Huot.

"There has been a succession of events that have brought the series to fame, including, above all, in 2008, the start of the animation on TNT."

Creator Oda has not finished telling this story, although he cannot himself say how many more books he will be releasing before he draws the final strip.

"We are in the last part, which he announced that he was eager to draw it. The story is progressing rapidly, with an author who is systematically renewing himself.

"It will be 25 years in 2022. (The story has been) written before our eyes. It's a chance, because we tend to discover the classics at school, completed once and for all."