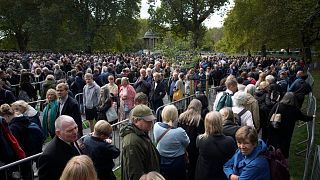 On Friday, thousands of mourners continued to queue to pay their respects to the late Queen Elizabeth II.

The queue to see the Queen lying in state stretched for nearly four miles beyond Tower Bridge.

The queue snaked along the south bank of the Thames and then over a bridge leading to Parliament.

The thousands of people in the queue were not worried about the hours-long wait.

The late monarch will lie in Westminster Hall until his funeral on Monday.